Demi Moore’s daughters stepped away from mom’s divorce drama to spend Thanksgiving with their father, Bruce Willis, and celebrate young Tallulah Willis’ coming out at a glam Parisian soiree on Saturday. SheKnows has the video. 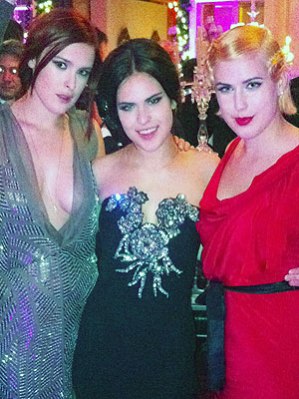 Bruce Willis and Demi Moore‘s youngest daughter Tallulah Belle came out at this weekend’s Le Bal des Débutantes at Paris’ Hotel Crillon — and for those who don’t speak French, no, this was not a Chaz Bono-sized announcement. Tallulah went old school to debut as a new member of high society on Saturday, Nov. 26.

While Moore worked on moving on after her split from Ashton Kutcher, 17-year-old Tallulah skipped town with Papa Willis, big sisters Rumer and Scout and new stepmom Emma Heming to be one of 23 belles celebrated at a glam Parisian debutante ball.

The practice of introducing debutantes goes back to a time when hopeful parents would parade their marriage-aged daughters in front of eligible bachelors and their families. Le Bal des Débutantes, which goes back to 1957 and was revamped 20 years ago, has a slightly different objective. Like most debutante societies today, it’s about bringing together power players’ children in the name of charity service… and high fashion, of course!

“Our first criteria is family excellence,” Le Bal des Débutantes founder Ophelie Renouard said of the event. “Then the couture aspect is essential because the debs have to be dressed in samples of haute couture gowns. While family background is important, we also look at the girls’ own achievements and potentials. The experience of le Bal is quite life-changing for them and after le Bal, they become well known for who they are.”

Tallulah, who made a name for herself after being caught with booze earlier this year, wore a sleeveless black Lanvin gown with a sequined decal at the bust. As you can see in the image above, big sister Rumer wowed with a seriously low-cut silver number, while Scout went for a retro look with a ’40s-inspired hairdo.

The youngest Willis debuted with 22 other daughters of the rich, powerful and sometimes famous, including actress Andie MacDowell’s youngest, Margaret Qualley. Former debs to come out at this lofty event include Rumer Willis, who had both Moore and Kutcher on hand for her big night (image below), Lauren Bush and Princess Fawzia-Latifa of Egypt. This year’s ball also boasted some royal progeny, while raising money for Bush’s charity, the FEED Foundation. 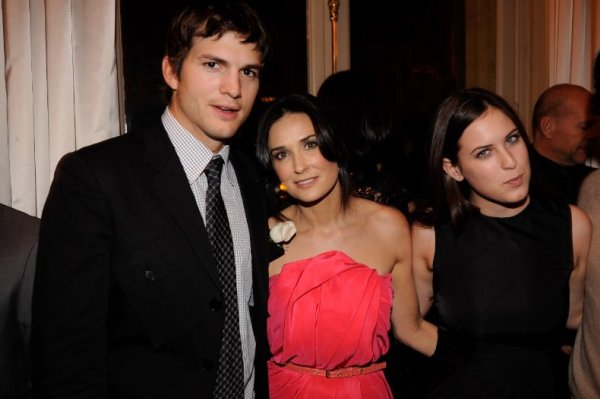 Mama Moore is facing quite the empty nest these days, with her marriage busted up and her daughters coming of age. Willis, however, is about to start fresh. He and his 35-year-old wife Heming are expecting their first baby.

Check out this behind-the-scenes footage from the event. The French news story includes interviews with Tallulah and Andie MacDowell, as well as a glimpse of Bruce Willis.