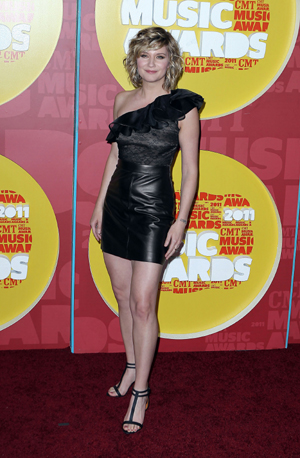 Things just got a lot sweeter for Sugarland singer Jennifer Nettles. The 37-year-old country star married former model and entrepreneur Justin Miller at sunset at a chapel in the foothills of the Smoky Mountains on Saturday, Nov. 26.

This wedding is a bright spot for Sugarland who was left devastated after six fans died when their stage collapsed at the Indiana State Fair this August.

Nettles met Miller in 2006 when he appeared in her music video for “Want To.” They have officially been dating two years and he was most recently spotted with her at the CMA Awards in November where her group nabbed the award for vocal duo of the year.

This is the second marriage for Nettles, who was married to club owner Todd Van Sickle before the relationship ended in divorce in 2007. She recently opened up to The Gazette about the pressures of getting married. “I’m from the South, and if you’re not married early, it’s off to the convent,” she said.

Don’t expect to see Nettles and Miller starring in their own Kardashian-like reality show, as she prefers to keep some things private.

“I try to keep my personal life personal,” she said. “People are really interested in this? This is so bizarre. It gets a bit toxic.”

No word yet when or where the newlyweds will take their honeymoon, but we suspect it will be after the holidays as Nettles is hosting the CMA Country Christmas special on Thursday.