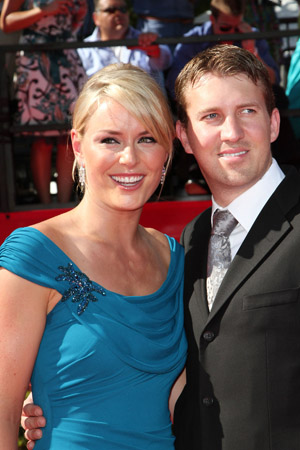 “This is an extremely difficult time in my personal life and I hope the media and my fans can respect my need for privacy on this matter,” she said in a statement to the AP. Thomas reportedly filed last Monday.

The couple wed in Utah in 2007 and he soon took the place of her father as her close confidant and coach. The transition led to strife between Lindsay and her father, Alan Kildow — he wasn’t even invited to her wedding.

Thomas also gained a reputation as a camera-loving Svengali during his years with Lindsey, earning him the nickname “TV.”

“He’s the one that’s like, ‘OK, really? That’s enough. You need to take a break, take a rest,'” Lindsay said of her husband. “Most of the time I’m like, ‘I’m good.’ He knows me really well, knows when I’ve had enough.”

He was also known to be her harshest critic, though she swore they were able to turn it off while at home.

“We learned you can hash out a lot in confined spaces. …As husband and wife we know that sometimes we have to flip the switch and be a normal couple, not a coach and athlete. We don’t talk about racing as much as you might think,” she told the New York Times last year.

Maybe now she can repair her relationship with her father. It sounds like he wants to — the proud father still follows her competitions and even watched her Olympic win on the web.

“It was terrific skiing,” Kildow told The Associated Press after she won in Whistler, British Columbia. “Absolutely terrific.”