Congrats to Anne Hathaway and Adam Shulman. The happy couple have announced that they are engaged to be married, a rep for the Oscar-nominated actress tells People. 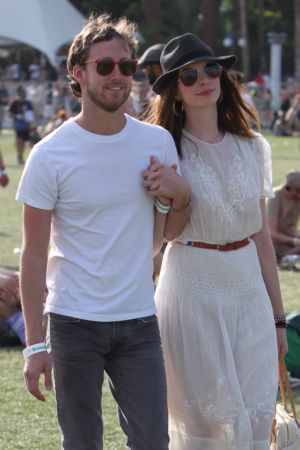 The holiday weekend brought more than turkey and stuffing for Rachel Getting Married actress Anne Hathaway. The star is now engaged to wed her longtime beau Adam Shulman, her rep confirmed to People magazine on Monday.

Anne debuted a new diamond engagement sparkler, designed by Kwiat Heritage, as the couple strolled in a Brooklyn park on Sunday. The wedding announcement comes almost a year after the Oscar-nominated, former Disney princess moved into Shulman’s Park Slope apartment. The doting twosome even adopted a dog together.

“We hit it off immediately, but it took us a pretty long time to get together. He thought that I had a boyfriend and I thought that he had a girlfriend, so I thought that I’d better keep my distance because I didn’t want to be that girl… Things sped up a bit— and I think I’ll leave it at that,” Anne once said of her now fiancé, whom she met through mutual friends in late 2008.

Shulman is a 30-year-old jewelry designer and sometime actor who appeared on the defunct NBC drama American Dreams. He began dating Hathaway, 28, shortly after her split from her swindler ex, Raffaello Follieri. Follieri is a convicted con man accused of bilking investors out of millions of dollars. He was charged with 14 counts of money laundering, conspiracy and wire fraud and sentenced to four-and-a-half years in prison in 2008. Anne was further humiliated when federal officials confiscated the jewels Follieri had bought her with some of the stolen dough.

In an interview published in the November 2010 issue of Vogue, Hathaway confessed that the ill-fated four-year love affair with Follieri left her weary of trusting people, “It takes a minute for me to let my guard down, but once I do and I get to know someone, I’m very open, very trusting. Some might say too trusting.”

Adam gave her a new reason to believe in the goodness of man, “So far, it’s worked out great. Which has its wonderful side, of course, but also it was exhausting and sometimes it would freak me out. Mellow doesn’t always make for a good story, but it makes for a good life,” Anne told Harper’s Bazaar in June.

No wedding date has been revealed, but we’ll keep you posted.