Prince William is being hailed as a hero today after a dramatic sea rescue. Why is Russia thanking him? 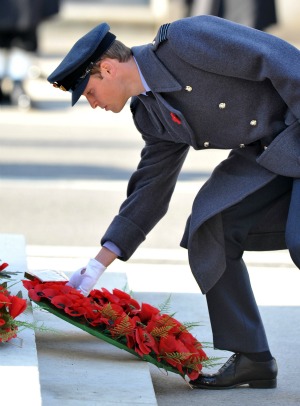 While most of us spent our weekends recovering from a turkey coma, Prince William was hard at work saving lives. The Brit saved two shipwrecked Russian sailors from certain death after their ship sank in the frigid waters of the Irish Sea.

Wills, who works as a helicopter pilot for the Royal Air Force’s search and rescue team, was at the helm as the rescue mission played out. The Russian ship Swanland was carrying 3,000 tons of limestone when it was hit my a massive wave that cracked its hull.

The body of one of the Russian crew members was also recovered, but five others remain missing despite hours spent scouring a 300-mile radius of the sea by Prince William’s search and rescue team.

The royal is being hailed by Russia today for his help in the rescue.

Prince William’s words of admiration for the Queen >>

“We know that you took an active part in the rescue and the two seamen were saved thanks to your selfless effort under the bad weather conditions,” U.K.’s Russian ambassador, Alexander Yakovenko, wrote in a letter to Prince William that was posted on the embassy’s website.

“Let me express to you and your colleagues my deepest gratitude for saving the lives of the Russian citizens.”

Prince William is based in Anglesey, where he lives in a quaint farmhouse with his beautiful bride Kate Middleton — when they’re not in London on official royal duties.

read on for more prince william and kate middleton

Prince William and Kate Middleton head to Denmark for UNICEF