Tyler Perry may substantially scale back Kim Kardashian’s scenes in his upcoming film The Marriage Counselor following a public outcry. 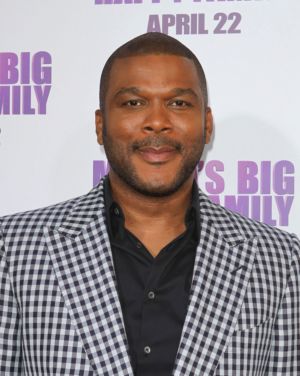 Psst… we hear Tyler Perry, the actor-director-producer dubbed Hollywood’s “Most Powerful Man” by Forbes, has hired a team of damage-control experts to help him deal with the boatload of backlash he’s received since casting controversial socialite Kim Kardashian in an upcoming film about marriage.

And that could be bad news for Kim’s budding “acting career.” (Cue the laugh track…)

Mere days after Kardashian announced that she was putting the kibosh on her Blink-And-You-Missed-It marriage to NBA baller Kris Humphries, Perry — noted for his plays and films comprised of largely African-American casts — handpicked the reality star for a bit part in his latest dramedy, The Marriage Counselor. Kim, whose acting credits include the true-to-name Disaster Movie and an episode CSI: NY, will play the bestie of an adulterous relationship expert in the film, which is expected to open in theaters sometime next year. The wannabe starlet hired an acting coach to help her prepare for the role, but that hasn’t stopped dozens of fans from flooding Perry’s website with their outrage.

One disgruntled poster seemed to sum up the overall sentiment, writing:

“Well Tyler, since you are going ahead and keeping Kim Kardashian in your new movie in spite of how your fans feel tells it all. You’re beginning to sound arrogant. I feel so proud of how hard you work and how connected you are to your fan base. I don’t see it as your fans telling you what to do I feel like we can because of our undying support, but dang it Tyler Perry, Kim Kardashian does not fit.”

Tyler Perry on Oprah: I was severely abused >>

Tyler later penned an open letter to his fans, defending his decision to cast Kardashian and hitting back at the criticism. But behind closed doors, snoops say Perry’s sweating. In fact, he is considering slicing Kim’s already small role in half to appease his flock — a move which would leave many of the vixen’s already-taped scenes on the cutting room floor. (Or in this case, the “kutting room” floor.)

“He’s really upset with the negative press surrounding the movie because of Kim,” a big-mouthed tattle divulged to Star columnist Victoria Gotti. “He’s even meeting with lawyers and damage-control experts to explore possible solutions that will turn this around.”

So far, axing a chunk of Kim’s footage appears the best option, say those in-the-know.

“Kim obviously wouldn’t be happy, but he’ll get his way in the end.”