Chaz Bono — the transgender son of entertainment icon Cher — proposed to his longtime girlfriend on the one-hour special Being Chaz, which aired Sunday night on OWN. 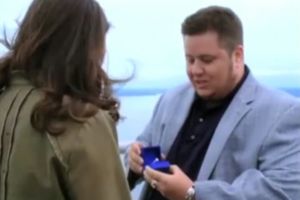 Chaz Bono is so shy!

Cher’s transgender daughter-turned-reality-star son popped the question to his longtime girlfriend, Jennifer Elia, on top of the Space Needle in Seattle. Oh — and cameras were conveniently there to capture the romantic moment for his one-hour OWN documentary special, Being Chaz. The footage is totally adorable, even if Chaz is so shy that he never technically pops the question! Like a typical man,  he just gets tongue-tied and kind of shoves the ring in her face.

Guess that means the transformation from female to male is complete!

“It’s gorgeous. Thank you so much. It’s stunning. It’s huge,” the more eloquent Elia told him.

We suppose that means “Yes?”

The follow-up to the Emmy-nominated docu-series Becoming Chaz, Being Chaz — which aired on Sunday night — documented the aftermath of Bono’s transition from female to male. The special also included a look at some of the backlash he received for being the first transgender contestant on the 13th season of ABC’s Dancing with the Stars.

“People feel so angry that Chaz is entering their television,” Elia says in the documentary. “People who make change get shot and I don’t think that’s worth it… This is insane. It’s not worth doing a show if you’re going to get shot. I don’t want him to die for a cause.”

Meanwhile, Chaz is being courted to join his former DWTS co-stars — including winner J.R. Martinez, David Arquette and Queer Eye for the Straight Guy’s Carson Kressley — on an all-male daytime talk show inspired by The View.

No word on yet a wedding date.