Will Katy Perry one day play Marilyn Monroe on Broadway? 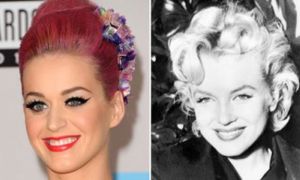 Related story Katy Perry Jokes That Moms Are Just Like Pop Stars: 'You're Up All Night'

Perry is the Oscar-winning Hollywood producer’s first choice to play the Tinseltown legend in the Broadway adaptation of My Week With Marilyn. The movie is a behind-the-scenes look at a week in Monroe’s life during the filming of the 1957 movie The Prince and the Showgirl, which co-starred Laurence Olivier. She befriends a young man who works as a runner on the film’s London set and is defenseless against her notorious charms. The film, which features Michelle Williams as Marilyn, has already received a big thumbs-up from the reviewers and Oscar buzz to boot.

This would be Katy’s first foray into musical theater. Her only other main “acting” gig was a voice over credit as Smurfette in The Smurfs movie released over the summer. But what Katy might lack in credentials, Weinstein says, she makes up for with her powerful voice and bombshell style — typical of Monroe who was a movie actress, style icon and global superstar back in the 1950s.

“If My Week With Marilyn is successful, at some point, five years, ten years from now, I think Katy would be perfect to play Marilyn Monroe in My Week With Marilyn on Broadway, sing those songs, do the dances,” Weinstein told E! last week, explaining why he has his eye on Perry to bring Marilyn to the stage.

Weinstein met Perry in 2010, when he took his daughters to the annual Jingle Ball concert at Manhattan’s Madison Square Garden. Katy was a headliner. A remix of her new song, “The One That Got Away,” is featured in a trailer for the Marilyn movie and has helped generate interest among her fans.

“Katy posted it on her Twitter and Facebook and the next thing you know 250,000 people have downloaded the trailer in an hour.”

How do you feel about seeing Katy in the role of one of the world’s most famous blondes? After all, she’s already tried every other hair color!