Lauren Alaina is the talk of Twitter after she flubbed a line of the national anthem just before kickoff at the NFL’s Thanksgiving Day matchup between the Detroit Lions and the Green Bay Packers. 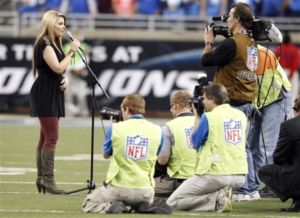 Remind us to never cast Lauren Alaina in a revival of Don’t Forget the Lyrics!

The American Idol alum celebrated Thanksgiving Day as a top 10 trending topic on Twitter after flubbing the lyrics to our national anthem, “The Star-Spangled Banner,” in front of a full house at Detroit’s Ford Field. Yep, Lauren — who finished second on the FOX talent show last season — has joined Hollywood heavyweights (insert eye-rolling here) like Roseanne Barr, Kat DeLuna, Anita Baker and Christina Aguilera in the illustrious “National Anthem Slayers Hall of Shame.”

We like to think of it as the “Razzies of the Recording Industry” (patent pending).

Nerves seemingly got the better of L.A. as she took center stage at the big NFL showdown between the Detroit Lions and the Green Bay Packers on Thursday afternoon. The teen sensation suffered a brain fart of epic proportions about 35 seconds into her performance. After belting out the line “What so proudly we hailed, through the twi…,” a shell-shocked Lauren went totally silent for approximately five seconds.

Luckily, Lauren was able to complete the line, which happens to be “Whose broad stripes and bright stars…,” and wrapped up her performance with a smile. In an even greater stroke of luck, she was able to escape the stadium without being booed, egged or otherwise heckled by the audience — after all — hell hath no fury like a rowdy football fan.

If only the Twitterverse were so kind! Brian Baumgartner, who plays Kevin Malone on the NBC comedy The Office, was one of the many tweeters who gave Lauren a ribbing over her singing snafu.

“Oh Lauren Alaina… Poor you. Poor poor you….” he wrote as word of the debacle spread across the internet like an inferno.

Lauren Alaina wants to be “inspirational to young girls” >>

In the spirit of the holiday season, the aspiring pop singer managed to find a few allies in the face of humiliation. “It’s all about how you finish,” FOX Sports correspondent Joe Buck said in a show of support for Lauren. Another former Idol alum, season five finalist Kellie Pickler, sent her words of support to Alaina via Twitter.

“HEY DOLL! YOU HANDLED YOURSELF LIKE A PRO! SEND THE BULLIES MY WAY & I’LL TELL EM’ WHERE TO GO,” the newlywed tweeted.

A short time later, a grateful Lauren took responsibility for the brief-but-resounding lapse in memory in her own posting to the microblogging hub.

“Thank you everyone for the kind words. But the truth is I messed up. I’m gonna spend the rest of the day being thankful for all my blessings… I have No excuses. I messed up. You know what can ya do. At Least didn’t fall down again,” she wrote, referencing injuries she sustained when she fell down a flight of stairs during the “Idols Live Tour” in July.

It turns out turkey day was no time to be an Idol. While Lauren is sporting a “star-spangled sad face,” baby-faced crooner Scotty McCreery — who won a victory over the blonde in last May’s A.I. finale — left holiday revelers scratching their heads when he appeared to forget the essentials of lip-synching at the annual Macy’s Thanksgiving Day Parade. Note to Scotty: When pretending to sing live, it helps to actually move your lips.

Oprah Winfrey to Host OWN Spotlight Special on Racism in America: ‘Where Do We Go From Here?’