Jennifer Hudson has rarely spoken about the murder of her family members in 2008. Now the singer reveals she had originally planned to be with her mother the night she was killed. 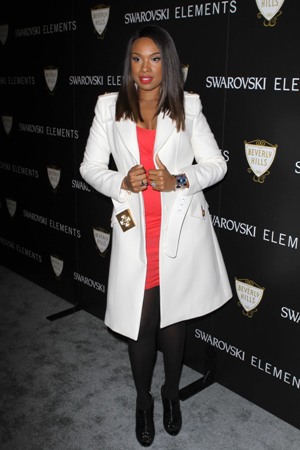 Jennifer Hudson is opening up just a bit about the horrific murders of her family members just over three years ago. The singer, who is on the cover of the latest issue of Ebony magazine, says she was supposed to have been with her mother the night she was killed.

Shortly before Oct. 24, 2008, Jennifer Hudson’s fiance David Otunga talked his love out of flying to see her mother, and into catching a flight to Florida to see him wrestle in a WWE match.

“That’s one of the things that saved my life, because I could have been home with my mom then,” the 30-year-old, whose road to fame started as a contestant on the third season of American Idol, said. “He wanted me to come out to Florida with him instead of going to Chicago.”

Jennifer Hudson, pictured here in Los Angeles on Nov. 11, continued, “I flew out to see him; that’s why I’m still here. I’ve never said that before, and I can’t believe I just said that now. But I didn’t know. He was just like, ‘I’m going to this wrestling thing, and it’s in Tampa. I’m going out there now, so you can come out there and see me versus going home.'”

At home in Chicago, Hudson’s 57-year-old mother, Darnell Donnerson, and the singer’s 29-year-old brother, Jason, were found shot to death. Her nephew, 7-year-old Julian King, had been abducted and was later found murdered as well.

In the time that has passed since the tragedies, Jennifer Hudson and David Otunga welcomed a son, David Jr. The singer has also found success as a Weight Watchers spokesperson, revealing on The Oprah Winfrey Show in February she had lost 80 pounds.

For more with Jennifer Hudson be sure to check out the November/December issue of Ebony.