Billboard has named their Rising Star of 2011 and it’s Nicki Minaj! The Young Money rapper has had an amazing year filled with chart-topping singles and a platinum album. This latest honor is just icing on the cake. 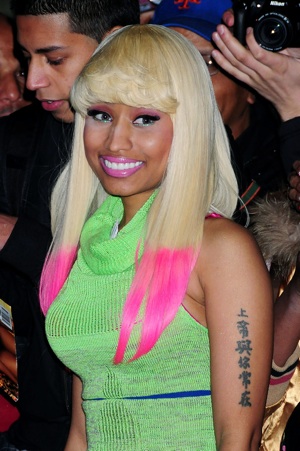 Nicki Minaj‘s career is on the move. Over the weekend, she won two trophies at the American Music Awards and now she’s being honored by Billboard. The rapper has earned the title of Billboard‘s Rising Star of 2011.

Bill Werde, Billboard‘s Editorial Director says, “Nicki Minaj has established herself as a force in hip-hop and pop music, and we’re thrilled to recognize her accomplishments over the past year by honoring her as this year’s Rising Star.” He continues, “Her unique style and powerful sound will undoubtedly lead to a long and lustrous career and we look forward to seeing where she goes and what she does next.”

After hearing the news, Minaj humbly thanked her fans and hinted that there’s more to come. “I am deeply honored to be recognized by Billboard,” said Minaj. “My nation of barbz and I have come a mighty long way; yet we are nowhere close to where God will take us. Sit back and enjoy the ride.”

Minaj is following in the footsteps of previous Rising Star winners Jazmine Sullivan, Lady Gaga and Colbie Caillat. The rapper plans to follow up her successful 2010 debut album Pink Friday with her sophomore effort, Pink Friday: Roman Reloaded. It was on Twitter that Minaj revealed the new album’s title and release date.

Roman is short for Roman Zolanski. He’s one of Nicki Minaj’s many stage personas. He’s described as a reckless young boy who loves to get into trouble. That means the theme for Roman Reloaded could be much more aggressive than its predecessor.