How do all those presents get into so many houses in one night? In the animated film Arthur Christmas, Santa and his team of swat elves makes it happen, that is, until one gift gets lost. 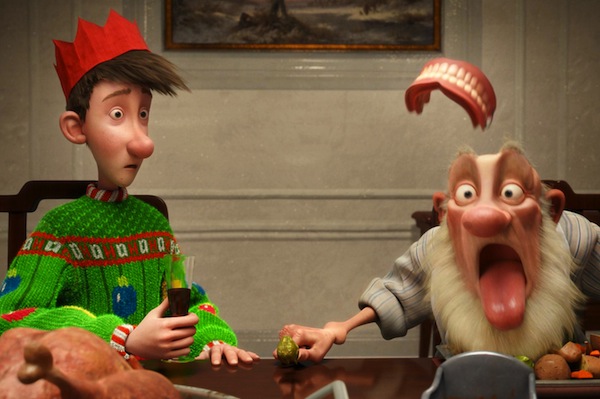 Let’s just be realistic about this whole Christmas thing. There’s no way one man can go to every single house in the world and deliver millions of presents to millions of little children in one night. It’s just impossible.

Not if you’re Santa and if you apparently have a swat team of elves driving an intergalactic vessel the size of a small city that travels at the speed of light. Yep, we’re talking state-of-the-art.

So, with that kind of power and organization, it would seem improbable that any child on Santa’s very long list could ever be missed. Well, even the Master of Christmas has his flaws.

Everyone gets a present, right…?

When a child is skipped on Christmas night in the new animated film Arthur Christmas, there’s only one person who can get the job done. It’s Santa’s uncoordinated son, Arthur (voiced by James McAvoy with heart-felt sincerity, we might add!), who works in the mail room and wears fuzzy slippers.

Arthur feels it’s necessary to stop at nothing to get the missed child her present. What does Santa think about this? Arthur’s dad is Santa (voiced by Jim Broadbent), and he’s really just the face of the whole Christmas Eve operation. Things at the North Pole are more complicated than they seem.

The real man behind the job is Santa’s eldest son, Steve (voiced by Hugh Laurie). Steve is a perfect broad-shouldered, military style leader who has his eye on the prize, moving into his dad’s spot when the sun comes up on Christmas morning. 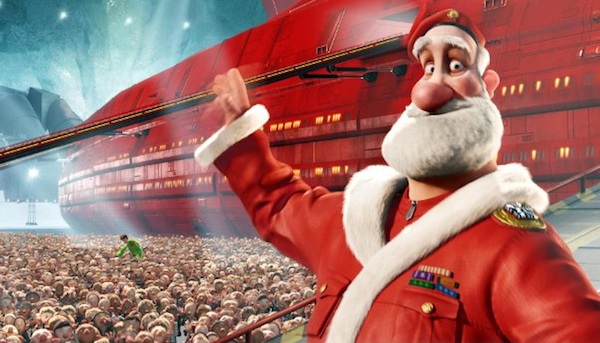 These three make for a funny yet mismatched trio with more than a few family problems (but hey, who doesn’t have family problems at Christmas, right?). Add a past-his-prime, crotchety Grandsanta (voiced by Bill Nighy) and you’ve got one ticking bomb of misplaced expectations.

Grandsanta was the man who got the job done “without all this technology” in an old-fashioned sleigh with reindeer whose names he can’t remember. Imelda Staunton voices Mrs. Santa, the woman behind the men and clearly the smartest person in this movie (sorry fellas!). With cabin fever setting in at the North Pole, it’s fun to watch the Santas go nuts with power or lack thereof. There’s no telling what’s going to happen this Christmas Eve.

Linney, Longoria and Cusack are elves!

In addition to the mayhem of many Santas, a host of elf voices come from some of our favorite actors: Laura Linney, Eva Longoria and Joan Cusack, to name a few. So, what’s so special about seeing Santa surrounded by all these helpers if he can’t get the job done?

Believing in the magic of Christmas, that’s what. Looking into the sky to see if you can find a jolly good man with a sleigh pulled by reindeer makes it worth waiting for those presents… when and if they eventually come. So, despite the ill-managed elves, family problems, space ship and all, Santa can’t give up on you, just as long as you don’t give up on him.

Arthur Christmas has something for everyone. It starts with a Justin Bieber music video of him singing a rendition of “Santa Claus Is Coming to Town.” The film has the kind of you-can-do-it gutso we’ve seen in movies like School of Rock. Its humor is a bit Wallace & Gromit meets Monty Python, and the classic storyline harkens back to films like Tim Allen’s The Santa Clause and Miracle on 34th Street.

Bottom line: If your Christmas spirit needs a little oomph, invest in the power of believing with the pure magic of Arthur Christmas, our top pick for a holiday family film this year.