Kris Humphries is reportedly plotting a seven-figure lawsuit against his soon-to-be ex-wife over allegations she stiffed him out of fair compensation for his role on her E! reality show. 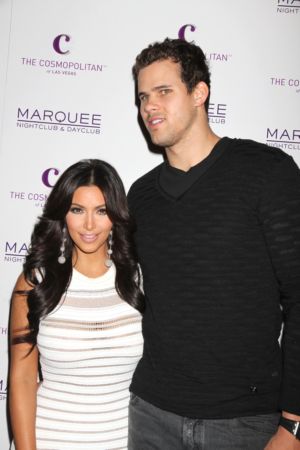 What do you do when you’re out of work and on the last second of your 15 minutes of fame?

Grab any sponsor who’ll have you and sue your famous wife!

In another embarrassing post-wedding blunder for Kim Kardashian, we’ve learned that the socialite’s not-quite ex-husband is planning to file suit against her for cheating him out of millions he believes he’s owed for his appearance on the upcoming season of her E! reality show, Kourtney & Kim Take New York. Professional hoopster Kris Humphries, 26, is still stunned that his marriage to the docu-soap star fizzled just 72 days after their lavish nuptials last August; and it’s going to take more than Kim’s infamous pouty lips and curvy hips to get The Hump out of her hair.

Life & Style (L&S) reports that Kris has hired a legal team as he prepares to slap his estranged wife with a lawsuit worth $10 million. Kim’s net worth is valued at roughly $35 million, thanks to her reality TV empire and a bevy of endorsement deals. Even though he signed a prenuptial agreement entitling him to (Drumroll, please) absolutely nothing, the 6-foot 9-inch athlete insists Kimmy owes him a small hunk of Kardashian Kash for showing up to work on Season Two of Kourtney & Kim.

The show was filmed in the Big Apple earlier this year and focuses largely on the former couple’s short-lived marriage. Humphries earned approximately $20,000 per episode and had been threatening to boycott the show over the salary dispute in the weeks before his split from Kim. Now that the exes are headed for divorce court, the claws are out and the lawyers are coming in.

“Kris has a legal team investigating his options. He’s claiming his role on Kourtney & Kim Take New York is bigger than he was told, and that’s why he wants more money,” an unidentified source told the publication.

Kim Kardashian left mortified by footage of her ex-husband >>

Other insiders suggests that image is the real reason Kris has retained legal counsel. He’s “worried about how badly he’s going to be portrayed on the series,” one such source squeals. Already labeled borderline verbally abusive and a “clumsy oaf” by many in the Kardashian Kamp, Kris reportedly wants to keep particularly damaging footage of him chiding Kim’s bestie about his sexuality from hitting the airwaves.

“Midway through the season, Kris starts bullying Kim’s best friend, Jonathan Cheban, about his sexuality,” another L&S spy-witness claims. “Jonathan isn’t gay, but Kris accuses him of being gay and criticized him for it in a really homophobic way. Jonathan is really upset.”

We won’t have to wait long to figure out what all the fuss is about. Kourtney & Kim Take New York is set to premiere Nov. 27 on E!