Mike Rowe is being sued by Mike Rowe. It seems the Dirty Jobs host has unknowingly been causing problems for a prison inmate of the same name. 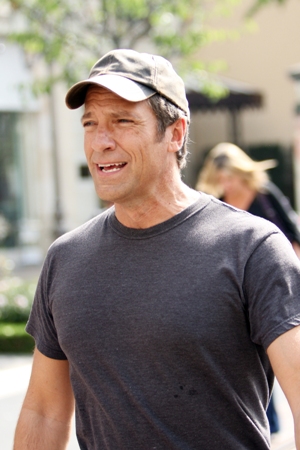 Mike Rowe, prisoner in South Dakota, has a bone to pick with Mike Rowe of Dirty Jobs fame. The inmate apparently gets teased relentlessly for sharing his name with the television host and he’s suing mad.

The incarcerated Mike Rowe claims he copyrighted their shared name earlier this year and the celebrity Mike Rowe has no right to use it. Furthermore he said, “I can’t live here in prison without being called Dirty Jobs or … Dirtiest Man. I am subject to this ridicule every day that I live.”

Funny enough, Mike Rowe (from television) doesn’t think suing is such a bad idea! The Dirty Jobs star tells TMZ of the prisoner, “The guy has a good point, I’ve wanted to sue myself for years now.”

In addition, the prisoner is not a fan of the celeb’s choice of brands to endorse. The man serving time for repeat DUI offenses said, “Lee Jeans states Mike Rowe wears Lee Jeans or [is] for them. I do not wear nor have ever worn Lee Jeans and further, I am not for them.”

The celebrity Mike Rowe commented further, “My attorneys are taking the charges very seriously. Naturally, since I got my last name from my Dad, I’m preparing my own lawsuit against him.”

The 49-year-old host for the Discovery Channel continued, “And since my first name was my mother’s idea, she’ll be named as well. It’s a bit awkward, but I’ll be damned if I’m gonna be left holding the bag on this one. If they’d named me Steve or Frank, none of this would be an issue.”

Mike Rowe, who began his career on the QVC shopping channel, wasn’t about to let the Lee Jeans comment slide by without offering his imprisoned counterpart a bit of advice. “As for the other Mike Rowe, I really do feel his pain and can only suggest that he avoid Lee jeans while behind bars,” he said. “They really do make your butt look good.”