Can you pull off Pippa Middleton’s royal bridesmaid dress designed by Sarah Burton for Alexander McQueen? Buy a version of it and find out!

Bridesmaid Pippa Middleton in her booty-licious royal bridesmaid gown designed by Sarah Burton for Alexander McQueen was all the rage at Prince William & Kate‘s royal wedding in April. Today, Net-a-Porter released a cowl-neck, silk-crepe gown almost identical to Pippa’s bridesmaid dress, with a few tweaks. It’s not sold out yet! 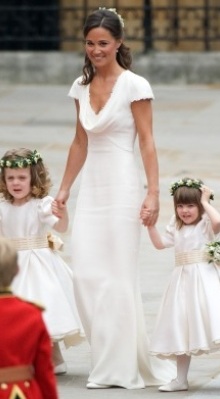 Everyone loved Princess Kate’s royal wedding gown, which was also designed by Burton for McQueen, but it was her hot sister, Pippa Middleton, who had everyone talking after the lavish April nuptials, thanks to the way she filled out her white bridesmaid gown.

Now, Net-a-Porter is selling a McQueen gown with the same silhouette as Pippa’s, albeit with a few tweaks. The new version (middle image above) substitutes a covered zip for the gorgeous, but cumbersome, buttons Middleton had going down her back (right), while the sleeve and neck seams also have a slightly different finish. And of course, Middleton’s adorable mini-bridesmaid sidekicks (left) are not included!

The gown that made Pippa a household name is only available on Net-a-Porter’s UK site and goes for about $3000, which is much easier to swallow than the $31,000 the Middletons are rumored to have paid for Pippa’s gown. The smallest size has already sold out, but at press time, all other sizes were still available.

The McQueen gown was also available in red, which is how Cameron Diaz wore it to the 2010 Golden Globes. Diaz’s satin version came from the pre-Fall 2009 collection and this season, Net-a-Porter’s U.S. site had hot red and navy knee-length, wool versions, but both have already sold out.