The evil in the upcoming new installment of the Batman series is bigger and badder than ever, according to actor Tom Hardy and director Christopher Nolan. 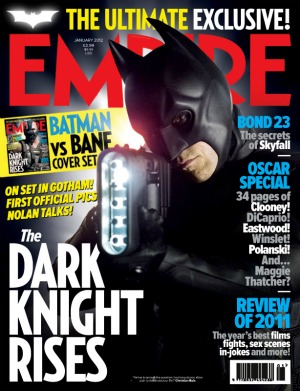 We still have a long eight months to wait until The Dark Knight Rises is released next summer, but director Christopher Nolan and actor Tom Hardy are spilling some tantalizing tidbits about the epic film.

In an interview with Empire magazine, the pair discuss the movie’s biggest (both literally and figuratively) villain and how he affects Bruce Wayne.

“It’s really all about finishing Batman and Bruce Wayne’s story,” Nolan told the magazine. “We left him in a very precarious place. Perhaps surprisingly for some people, our story picks up quite a bit later, eight years after The Dark Knight. So he’s an older Bruce Wayne; he’s not in a great state.”

“With Bane [the flick’s major villain], we’re looking to give Batman a challenge he hasn’t had before. With our choice of villain and with our choice of story, we’re testing Batman both physically as well as mentally.”

“He’s brutal. Brutal. He’s a big dude who’s incredibly clinical, in the fact that he has a result-based and oriented fighting style. It’s not about fighting. It’s about carnage,” Hardy said.

“The style is heavy-handed, heavy-footed, it’s nasty. Anything from small-joint manipulation to crushing skulls, crushing rib cages, stamping on shins and knees and necks and collarbones and snapping heads off and tearing his fists through chests, ripping out spinal columns. He is a terrorist in mentality as well as brutal action.”

Read the entire interview in the new issue of Empire magazine on newsstands Thursday. The Dark Knight Rises hits theaters on July 20, 2012.