Selena Gomez dressed to impress at the American Music Awards in Los Angeles on Sunday night alongside her boyfriend Justin Bieber. 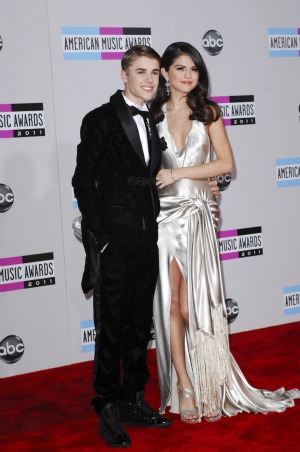 Selena Gomez is doing her best to send us a message that her Disney days are well behind her.

Gomez made a special red carpet appearance alongside her main man, Justin Bieber, on Sunday night in Los Angeles. Arguably the best look of the night was Gomez’s old Hollywood-style soft curls and classic makeup that worked amazingly well with her metallic dress. The 19-year-old worked the Nokia Theatre carpet in a slinky, pewter satin Giorgio Armani number, which she complemented with a glittering purse and matching Jimmy Choo sandals.

The “Love You Like a Love Song” singer showed some skin in the glam gown’s plunging, cleavage-baring halter top with a low-cut back and a daring thigh-high slit.

Many say her best accessory was her boyfriend who also was going for the grown-up look in a dapper black tuxedo and a side-slicked hairstyle. When the couple finished posing for photographers on the red carpet, the 17-year-old teen heartthrob even carried his girl’s trailing train for her as they exited.

Gomez, who hosted the MTV European Music Awards earlier this month, didn’t perform during the night, but was spotted having a blast, singing along to Nicki Minaj’s “Super Bass” with pal Taylor Swift and proudly watching Bieber perform “Mistletoe” from the front row.

Gomez has kept quiet since 20-year-old California woman Mariah Yeater came forward to claim that Bieber is the father of her three-month-old baby. Now that the paternity suit has been dropped, Gomez opened up on The Ellen DeGeneres Show about how she has been dealing with those claims against her boyfriend.

“What a crazy last two weeks it’s been in the news,” Ellen said, referring to Bieber’s baby mama drama.

“To say the least,” Gomez replied back.

According to Radar Online, though, Bieber allegedly took a paternity test last week at an undisclosed location in New Jersey. The teen idol insists he is not the baby daddy, and that he has never even met Yeater and that she is victimizing him for cash.