Christina Aguilera’s performance at the 2011 American Music Awards fueled rumors that the singer is expecting her second child. 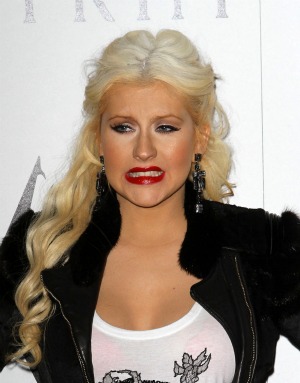 Could Christina Aguilera be hiding a pregnancy? The singer’s larger-than-life appearance fueled rumors that she might be expecting again during her performance at the American Music Awards in Los Angeles on Sunday night.

The singer joined Maroon 5 on stage during their hit “Moves Like Jagger,” clad in one of Herve Leger’s curve-hugging bandage dresses, which she teamed with sky-high Christian Louboutin heels and a wildly frizzy hairstyle. The Twitterverse quickly reacted to Aguilera’s noticeably bigger mid-section bump, fueling rumors that the mother of one is expecting.

A close friend of Aguilera’s, though, says the pregnancy rumors are simply not true. “Christina loves her curves,” a source told Radar Online. “She is not pregnant! She’s a Latina woman with curves and since when is it not OK to have curves?”

The source adds, “She feels like she is setting an example for women and young girls, especially Latinas. She’s very proud of her curves. Christina thinks she is a good role model — not everyone is super skinny and she wants girls to embrace their body type.”

Fans and critics in the cyber world aren’t the only ones who’ve been slamming Aguilera for her fluctuating weight. In August, Kelly Osbourne had some harsh words for the star on an episode of E!’s Fashion Police.

“Maybe she is just becoming the fat b*tch she was born to be,” Osbourne, 27, chimed in after Joan Rivers criticized the singer for a too-tight outfit. “I don’t know. She was a c*nt to me. She called me fat for so many f*cking years. So you know what? F*ck you! You’re fat too.”

In Touch magazine recently reported that Aguilera is currently battling to lose her excess pounds with a personal trainer, a dietician and a hypnotist.