Wesley Snipes’ American Express tagline is need of a refresher. “Don’t leave to prison without paying the bill” would unfortunately be a better fit! 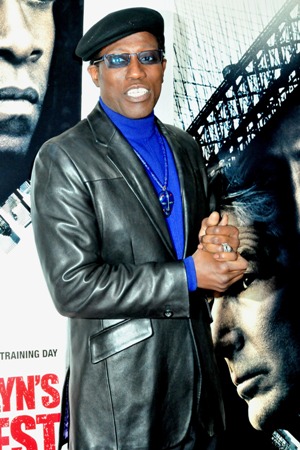 Wesley Snipes is being sued by American Express — the same company the imprisoned actor once appeared in a film commercial for. The credit card company says the actor racked up exactly $29,343.03 worth of charges before being locked up for tax evasion and hasn’t been making payments since.

Wesley Snipes, seen here in March 2010 at one of his last public appearances before heading to prison, is expected to be released from his three-year sentence in 2013. If AmEx gets their way, the 49-year-old will not only owe them the near $30,000 in charges plus interest, but he will also be responsible for covering their legal fees.

The actor was convicted in February 2008 of three misdemeanor counts of failing to file federal tax returns. Wesley Snipes was temporarily allowed to remain free on appeal, but the 11th Circuit affirmed his convictions in July 2010. The Florida Federal Court then revoked his bail and sent him to prison in December of that same year.

An appeal earlier this year argued that Wesley Snipes should have been tried in his home state of New York, rather than in Florida where his driver’s license was issued. It was denied by the Supreme Court and he remains currently in prison.

It was in the 1989 film, Major League, that Wesley Snipes played character Willie Mays Hayes, who filmed a commercial for American Express. The credit card company’s well-known tagline was altered from “Don’t leave home without it” to “Don’t steal home without it.”