Another reality relationship has bit the dust. The Bachelorette’s Ali Fedotowsky and Roberto Martinez have announced they are splitting up. 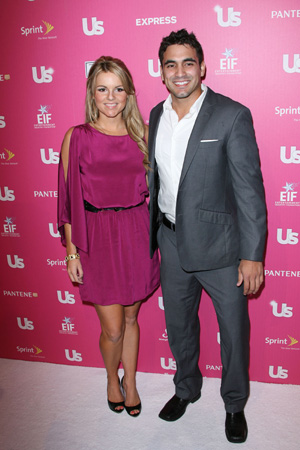 The Bachelorette seems to be producing more broken hearts that lifelong romances. After an 18-month engagement, The Bachelorette couple Ali Fedotowsky and Roberto Martinez have announced they have split.

“Ali Fedotowsky and Roberto Martinez have ended their relationship,” their rep said in a statement. “As they go through this difficult time, we ask that you respect the couple’s privacy.”

What caused the sudden split? Martinez proposed to Bachelorette Fedotowsky (who had originally been turned down in The Bachelor with Jake Pavelka) in 2009. The couple seemed happy, however sources say that their relationship “has been tumultuous since day one.” Their postponed wedding in October was the first indication something was wrong.

“She’s miserable in the relationship and he is, too,” a friend of the couple tells Us Weekly.

Martinez still has a photo of him and Fedotowsky on his twitter page and makes no indication of the split. He even cracked a joke, writing on Nov. 3, “Never fails, every time I fly with Ali, at landing, she thinks the pilot is doing something wrong and starts freaking out. #WhereIsJake.”

Fedotowsky also makes no mention of the split on her twitter page, only writing, “Feeling very thankful for all the beautiful, kind, giving people in my life. “

Is The Bachelorette cursed? Season two’s Meredith Phillips ended her relationship with Ian Mckee a year after the show ended. Jenn Schefft rejected the proposal by Jerry Ferris on the final episode of The Bachelorette in 2005. Season four’s Bachelorette DeAnna Pappas broke up with Jesse Csincsak shortly after the show ended, as did season five’s Jillian Harris and Ed Swiderski. Season one Bachelorette Trista Rehn seems to be the one success story, as she married Ryan Sutter in 2003 and they have two chidren together. Last year’s Bachlorette Ashley Hebert is still engaged to J.P. Rosenbaum, however it remains to be seen if the couple will actually get married.

Tell us: Do you think The Bachelorette is cursed?