Oprah Winfrey is heading to primetime television! Find out just what you can expect when Oprah’s Next Chapter debuts in early 2012.

Oprah Winfrey is coming back to television early next year in a new show for OWN titled Oprah’s Next Chapter. Fans can look forward to seeing the former The Oprah Winfrey Show host once again tackle hot topics and get personal in interviews — but this time it won’t be from the comfort of a stage. 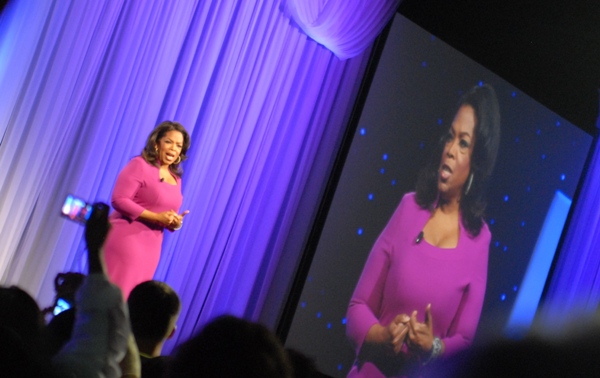 “After 25 years, I got myself out of the studio chairs,” Oprah Winfrey said in a statement. “I moved into the next chapter, and I am having more fun than ever — moving around the country and the world talking to people I’m really interested in getting to know and I think viewers will be, too. It is so energizing to be out and about in the world exploring new people, new places and new ideas.”

What kind of topics can Oprah fans expect the television mogul to cover? Of the variety in store, she explains, “I sat at the dinner table with a Hasidic Jewish family and tried to explain to the children who have never seen a television what TV is… can you imagine? I fire-walked with Tony Robbins — never pictured myself doing that! I celebrated the power of God and community with Joel Osteen and I’m planning a trip with Deepak Chopra to India where I’ve never been.”

Oprah’s Next Chapter is set to debut Jan. 1, 2012 with a two-hour premiere featuring Steven Tyler. The pair will reportedly discuss the music legend’s drug addiction, love life and his experience as an American Idol judge. Following the show’s debut, fans can find Oprah’s Next Chapter in its regular time slot on Sundays, 9:00/10:00 p.m. ET/PT.

A statement on the network’s website promises “riveting, enlightening in-depth conversations with newsmakers, celebrities, thought leaders and real-life families.” That includes a journey to Haiti with Sean Penn, a tour of Skywalker Ranch with George Lucas as Oprah’s personal guide and a slumber party at Southern chef Paula Deen’s Georgia estate.

Will you be watching the debut of Oprah’s Next Chapter on OWN?