It looks like Jennifer Lopez is having a lot of fun in her new cougar role with her boy toy, dancer Casper Smart.

Jennifer Lopez didn’t leave much to the imagination at the 2011 American Music Awards in Los Angeles on Sunday night. The mother-of-two took the stage in a nude sequined body suit to perform her hit single “On The Floor,” while her racy performance alongside her dancer/beau Casper Smart left everyone talking. 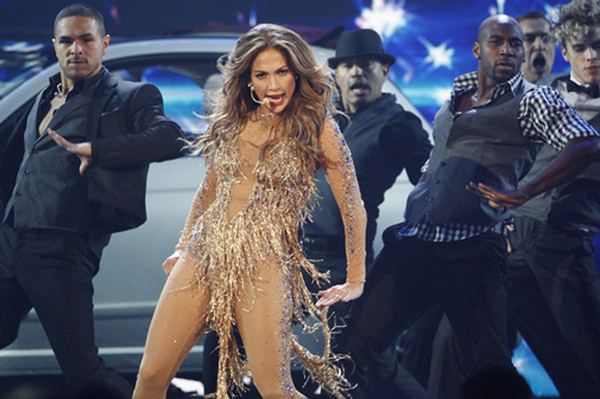 Lopez started her performance by pretending to forget the words to her song “Until It Beats No More” before her dress was ripped off and she began her sexy and energetic dance routine. At one point, she was grinding her famous derriere on Pittbull who later performed with her soon-to-be ex-husband Marc Anthony.

After performing onstage together, Lopez and Smart weren’t shy about their feelings for one another at an after-party packed with fellow celebs. According to reports, Lopez, clad in a sparkling white fringe dress, cheerfully worked the red carpet outside Greystone Manor in West Hollywood before joining her man.

Once inside the bash, she made a beeline for Smart, 24, grabbed his hand, and headed into a private booth near the DJ, reports Us Weekly.

Smart meanwhile has danced alongside Beyonce and Jordin Sparks as well as on Glee and in Step Up 3D, and has been part of Lopez’s team of dancers since earlier this year.

People reports that the affair is nothing serious and “just a fun fling,” but the media of course is speculating that it might be more.

Lopez and ex-husband Anthony, 43, who announced their split in July after seven years of marriage, managed to avoid each other on and offstage at Sunday’s big AMAs performance.