Jason Segel is starring in The Muppets, so it was only fitting that Kermit, Miss Piggy, Gonzo and the others helped the star perfect his Saturday Night Live monologue.

Jason Segel stepped out onto the Saturday Night Live stage hoping to make his first attempt at hosting a slam dunk. 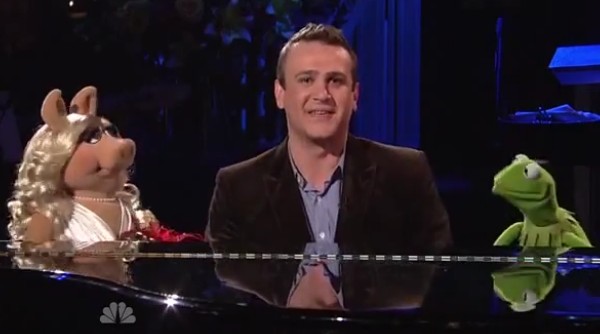 Segel fans need not worry — his opening Muppet monologue was funny and adorable from the start — beginning with a nervous excitement that he couldn’t quite put into words.

The star of The Muppets (opening Nov. 23) began, “I gotta be totally honest. The one thing I was really nervous about tonight was this monologue… because I really have no idea what to say.”

Segel continued, “So if you guys don’t mind, I thought maybe I would sing a song about the way I feel instead.”

He hopped over to the conveniently placed piano and was joined by a few of his Muppet friends.

Other noteworthy sketches included the “Kissing Family Thanksgiving,” where Jason Segel played a guy introducing his girlfriend to his overly-affectionate family (Paul Rudd dropped by for this) and the “Kemper-Pedic Bed” commercial.

In the “Kemper-Pedic Bed” sketch/commercial, Segel played the creator of a mattress that he says allows his wife to sleep, while he stays up doing all kinds of suggestive things, like “rolling dice” or “adjusting change” in his pajamas bottoms.

It was basically a nice little raunchy SNL bit.

Aside from Paul Rudd, Olivia Wilde also appeared in the “Seducing Women through Chess” digital short and Kermit stuck around to help Seth Meyers give the news in a segment called “Really!?!”

It was a fun a night and great first appearance by Jason Segel!

Head over to our comments section and tell us what you thought of Jason Segel on Saturday Night Live.