Wow. That’s all we can say after seeing a preview of Michelle Williams’ total transformation into Marilyn Monroe for My Week With Marilyn. We can’t wait to see it! 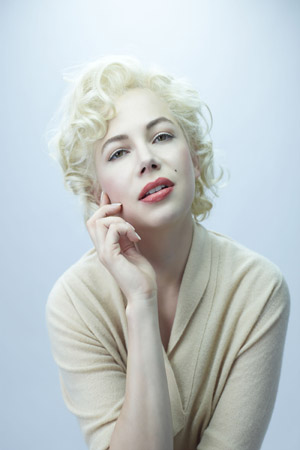 Michelle Williams wants to make one thing clear about her new film, My Week With Marilyn: it’s not a biopic.

“This isn’t the Marilyn Monroe story, so the movie is not a tragedy,” Williams told Reuters in a recent interview. “It’s a movie that Marilyn Monroe happens to be a character in.”

The film does, however, chronicle author Colin Clark’s experience with the visiting starlet during a week-long visit to the U.K. in 1956. Monroe was filming The Prince and the Showgirl opposite Sir Laurence Olivier when she met Clark, then an employee of the iconic actor.

The book documents Olivier and Monroe’s contentious relationship, along with the 23-year-old Clark’s growing infatuation with the sex icon.

“I’ve met all sorts of famous people, but Marilyn is different. Her aura is incredibly strong and in the flesh is almost more than one can take. When I am with her my eyes don’t want to leave her,” Clark wrote in a Sept. 11, 1956 journal entry. “It is a feeling one could easily confuse with love. No wonder she has so many fans and spends most of her time shut up at home. She seems frightened. I know I must not add to those persecuting her, but it is my job to assist her and I can’t resist being in her orbit.”

The story is riveting, but we’re more excited to see Williams‘ complete — and we mean complete — transformation into Monroe.

“I’m just relieved that I paid a proper homage, because I didn’t want to let her down,” Williams told Reuters. She prepared by watching all of Monroe’s films and spending countless hours on web research.

“I watched every movie countless times,” Williams explained. “The internet became a great research tool. There were a few fronts that were up and running simultaneously — the physical, the facade and her essence.”

One thing she won’t dish on? Whether or not the body she flaunts in My Week With Marilyn is all hers or not.

“I was definitely heavier than I am now, but I really don’t know how much,” she said. “But there are ways that she and I will never meet physically. For certain things, no matter what I do, I won’t be able to achieve that sameness… I was never going to get a body like hers!”

“Who knew I would actually sing and dance in the movie? I had a blast!”

Watch Michelle Williams in My Week with Marilyn