Christopher Walken was with Robert Wagner and Natalie Wood on the night she died. Is he talking about that night? 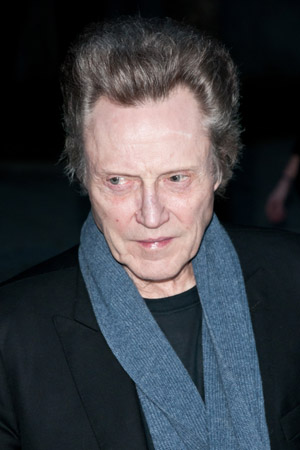 Walken — then a co-star of Wood on the film Brainstorm — was on the yacht with the actress and her husband, Austin Powers actor Robert Wagner, the night she died. The death was ruled accidental, but new information provided by the ship’s captain prompted officials to reopen the case.

Both Wagner and the captain — Dennis Davern — maintain that the couple fought on the night in question as they boated off California’s Catalina Island. Wagner never said why, but Davern maintains Wagner thought Walken wanted to have sex with Wood.

The LAPD confirmed that neither Walken or Wagner are considered suspects in the West Side Story actress’ death.

A radio interview with Walken on Washington D.C. radio station ESPN980 quickly made the route around the web. In the clip, Walken said “there was tragedy” on the boat docked off the California coast.

However, that clip was faked — Walken hasn’t spoken publicly on the new case developments. “Everyone that listens to our station knows it’s not real,” said ESPN80 producer Chuck Sapienza to The Hollywood Reporter.

Walken did talk about that tragic night during a 1997 interview with Playboy.

“Anybody there saw the logistics — of the boat, the night, where we were, that it was raining — and would know exactly what happened,” he said.

“What happened that night only she knows, because she was alone,” he added. “She had gone to bed before us, and her room was at the back. A dinghy was bouncing against the side of the boat, and I think she went out to move it. There was a ski ramp that was partially in the water. It was slippery – I had walked on it myself. She had told me she couldn’t swim; in fact, they had to cut a swimming scene from [Brainstorm]. She was probably half asleep, and she was wearing a coat.”

“You hear about things happening to people – they slip in the bathtub, fall down the stairs, step off the curb in London because they think that the cars come the other way – and they die. You feel you want to die making an effort at something; you don’t want to die in some unnecessary way.”