After 28 years, Regis Philbin has signed off of Live. Who will be taking his place next to Kelly Ripa (aside from guest hosts)? While we don’t know that yet, we do know how he spent his last show. 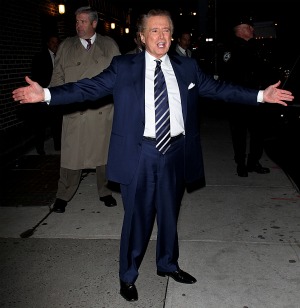 How do you usher Regis Philbin out of a show that he’s helmed for 28 years? Read on to find out who stopped by to honor Regis Philbin on his last day of Live! with Regis and Kelly.

Regis Philbin has made home viewers laugh every morning for 28 years. Through the Kathie Lee era to Kelly Ripa, he’s remained a constant in the morning talk show circuit and our lives as we’ve enjoyed morning coffee at home or while sneaking a peek at his latest morning antics on the TV’s at our work places.

The Live! with Regis and Kelly audience was not filled with the usual everyday people off the streets on the morning of his final show.

Kelly Ripa asked 80-year-old Regis Philbin how he was feeling at the open of the show, to which he replied, “I feel ok, I feel pretty good…the somberness of it all…”

The tribute went on with Mayor Bloomberg poking fun at Philbin, saying he found him a few new jobs like a cab driver and future Mayor, before presenting him with the key to the city.

Kelly Ripa said her own heartfelt goodbye, “How many steps does it take to change the course of a person’s day? I happen to know it is 43 exactly,” she said referring to her walk to the stage from her dressing room.

She went on to say, “On that journey of 43 steps you are all mine… you always want to make me feel like a million bucks. Always. Your light is what shined around all of us and what made us look so bright for so long… I look forward to the next 43 steps and may they fill you with the joy you’ve filled us with all these years.”

That paired with Rent’s “Season of Love” song — it was pretty emotional.

Kelly Ripa emotional over All My Children cancellation > >

Bob Iger then announced they were installing a plaque with his name and face on the side of the studio building and then, of course, Regis said his final words.

Regis Philbin signed off saying, “This was the last chance I had in this business, to make it here in New York… I guess it was fate that it would happen this way and it did.”

Philbin continued, “Some people ask why has this show stayed on so long and I think it’s answered to me every time people tell me why they watch it. They watch it, they say, because it makes them feel better. It makes them happy. I’ll never be able to top that.”

With his final words, Regis Philbin said, “I’ll always remember spending these morning with all of you. Thank you very much for these great years together, God bless you all and I hope I’ll see you again real soon.”

Did you catch Regis Philbin’s final show on Live! with Regis and Kelly? Head over to our comments section and tell us what you thought.