Sarah Michelle Gellar feels more confident about her body than ever before, and it’s all thanks to her daughter Charlotte Grace. 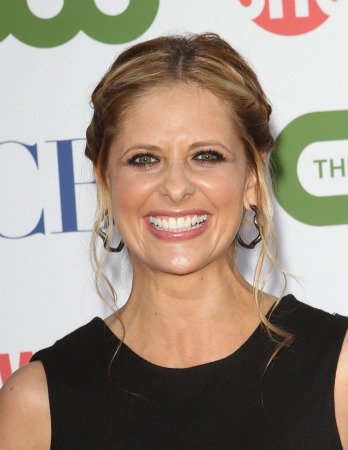 Ringer star Sarah Michelle Gellar isn’t shy about letting the world know that her priorities have changed in recent years. The star, who once admitted to having body dysmorphic disorder, says that even though she doesn’t obsess about her body image and weight, she still does what she can to stay fit — but just doesn’t overdo it.

“I still work out, but not five days a week. I do Pilates, I run on the treadmill, I walk to the soundstage rather than taking the cart,” the 34-year-old actress tells Self for their December issue. “I wish I could say I was in the best shape of my life right now, but I don’t put the same pressure on myself that I used to. So I don’t rock a bikini on Wilshire Boulevard — but I don’t know many people who do!”

Taking care of her 2-year-old daughter with Freddie Prinze Jr. is Gellar’s top priority, which is why the actress only works Monday through Friday.

“My perspective on work has changed: Work doesn’t define who I am,” she says. “I love what I do, but I don’t feel a burning pressure anymore. And because I’m working for fun, I get to enjoy it!”

Gellar, who was a size zero during her Buffy and the Vampire Slayer days, refuses to let dieting and body obsession dominate her life, as she did in the past.

“You can’t live your life by the scale. We don’t even have one in our house. I’ve never believed in them because your weight fluctuates. It’s more about how my clothing fits than a number,” Gellar explains. “Besides, if you deny yourself everything because you’re so focused on the mirror or the scale, then when do you get to enjoy life?”

“If you wear one bulky sweater, you’re pregnant or you’re fat. When you’re 5-foot-4 like me, any weight gain can look like a lot,” she adds. “People dissect you for two pounds. That can be incredibly difficult, but I don’t take it as personally anymore.”

Also, despite raking in millions as one of the most recognizable actresses in Hollywood, Gellar says she still clips coupons. Yep, she’s just like the rest of us… and Kate Gosselin.

She says, “We shop at Whole Foods, but we ask which fish is on sale. On sale doesn’t mean it’s bad! It probably just means it’s over-caught. And I clip coupons all the time. Why should you pay more for something that someone else is paying less for?”

It’s a big breath of fresh air to find someone in Hollywood who is so… normal.