Hunting for fresh releases at Redbox, Netflix, Blockbuster and On Demand? Pirates of the Caribbean: On Stranger Tides is the weekend’s hot new DVD/Blu-ray release, along with Larry Crowne, Beginners, The Lion King (in 3-D), Bellflower, Main Street, Griff the Invisible and Turtle: The Incredible Journey. 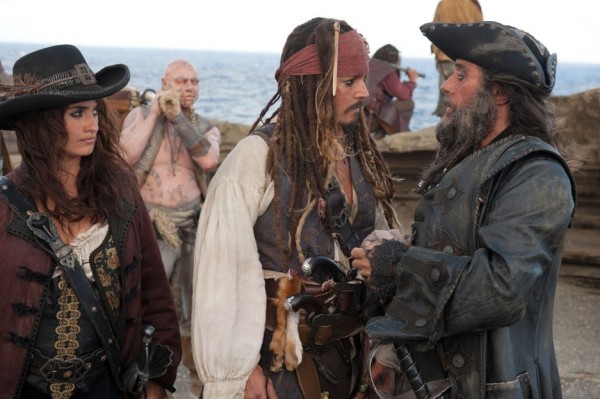 Here’s a look at the Nov. 15 releases and where they’re available this weekend.

Pirates of the Caribbean: On Stranger Tides

The fourth Pirates of the Caribbean installment swapped Orlando Bloom and Keira Knightley for a few astounding additions, including Penelope Cruz as Angelica, Ian McShane as Blackbeard and Rob Marshall as director. This Pirates has fewer sea battles than the previous incarnations, yet still cooks with suspense and expertly crafted action sequences. In short, the latest Pirates film is an utter delight. It is 100 times better than the last two and almost as good as the first film.

Pirates of the Caribbean: On Stranger Tides is available via Redbox, Amazon and some On Demand systems, but hasn’t yet landed at Blockbuster or Blockbuster Express.

After U-Mart employee of the month Larry Crowne (Tom Hanks) gets downsized due to his lack of a college education, he heads to the local community college to correct that. The story really takes off once Crowne meets his speech professor, Mercedes (Julia Roberts). She’s a bit of an alcoholic and has a husband (Bryan Cranston) who makes her miserable — in other words, not your typical Robert’s character. Hanks and Roberts are their usual fabulous selves and the supporting cast, including Cranston, Cedric the Entertainer, Taraji P. Henson, Wilmer Valderrama and Gugu Mbatha-Raw, shines, but Larry Crowne doesn’t quite hit on all cylinders.

t
Larry Crowne is available via Amazon, Blockbuster and some On Demand systems, but doesn’t arrive at Redbox, Netflix and Blockbuster Express until Dec. 13.

Filmmaker, writer, director, artist and social critic Mike Mills brings his own experiences to life in Beginners, a drama that jumps between past and present to explore the theory, that, in the game of love, there is no such thing as a professional. No matter the age, 35 or 75, we are all Beginners when it comes to understanding what makes the heart tick. The soul of the film is the father-son relationship, enacted by Ewan McGregor and Christopher Plummer. Plummer masterfully portrays a man who, very late in life, becomes driven by his passion to finally live as a proud, out gay man. While he finds the strength to embrace himself, the Los Angeles gay community and the love of a younger man (Goran Visnjic), McGregor’s character can’t seem to make love stick — until he meets Melanie Laurent’s Anna. Sparks fly and it is utter bliss to witness the two characters fall in love.

Beginners is available via Amazon, Blockbuster, Express and some On Demand systems, but hits Redbox on Nov. 29 and Netflix on Dec. 13.

It was a shock to everyone when Lion King roared back into theaters after 17 years and the 3-D redux ruled the box office, but was it really such a shock? The classic tale still resonates today and now, it’s ready to come home in 3-D — for those of us who actually have fancy 3-D TVs at home, of course.

t
The Lion King (in 3-D) is available via Amazon, Blockbuster and some On Demand systems, but has no release date for the Redbox and Blockbuster Express kiosks.

Ryan Kwanten plays a superhero in a movie with the tagline, “The greatest superpower is love.” Need we say more? In this romantic comedy, True Blood‘s Kwanten plays Griff — office worker by day, superhero by night. His world is turned upside down when he meets Melody (Maeve Dermody), a beautiful young scientist who shares his passion for the impossible. Fascinated by Griff’s idiosyncrasies, which are equal only to her own, Melody begins to fall for him. As Griff is forced to face up to realities of a mundane world, it is up to Melody to rescue Griff the Invisible for the sake of herself, Griff and their love for each other. (Synopsis from Griff the Invisible website).

t
Griff the Invisible is available via Amazon, Blockbuster, Netflix and some On Demand systems, but has no release date for the Redbox and Express kiosks.

Colin Firth and Patricia Clarkson headline this ensemble drama from Academy Award-winning screenwriter Horton Foote (To Kill a Mockingbird). When a small North Carolina town falls on hard times, the close-knit locals strive to get back on their feet. Things begin looking up, however, when a mysterious stranger makes a controversial proposal designed to put the town back on the map. Now it’s up to the members of the community to make the personal changes that will transform the town from the inside out. Orlando Bloom, Amber Tamblyn and Oscar winner Ellen Burstyn co-star. (Synopsis from Main Street website).

t
Main Street is available via Amazon, Blockbuster, Netflix and some On Demand systems, but has no release date for the Redbox and Blockbuster Express kiosks.

Miranda Richardson narrates this documentary about a little loggerhead turtle who follows in the path of her ancestors on one of the most extraordinary journeys in the natural world. Born on a beach in Florida, she rides the Gulf Stream up toward the Arctic and ultimately swims around the entire North Atlantic across to Africa and back to the beach where she was born. But the odds are stacked against her; just one in ten thousand turtles survive the journey. She encounters many hazards, nearly dying along the way and by the time she finally returns to the shores of Florida to lay her own eggs, 25 years have passed. (Synopsis from Turtle: The Incredible Journey website).

t
Turtle: The Incredible Journey is available via Amazon, Blockbuster, Netflix and some On Demand systems, but has no release date for the Redbox and Blockbuster Express kiosks.

Best friends Woodrow and Aiden spend all of their free time building Mad Max-inspired flamethrowers and muscle cars in preparation for a global apocalypse. But when Woodrow meets a charismatic young woman and falls deeply in love, he and Aiden quickly integrate into a new group of friends, setting off on a journey of love, hate, betrayal, infidelity and extreme violence more devastating and fiery than any of their apocalyptic fantasies. This Sundance film from writer, director and star Evan Glodell is an intensely personal story incorporating many real life events. (Synopsis from Bellflower website).

t
Bellflower is available via Amazon, Blockbuster, Netflix and some On Demand systems, but has no release date for the Redbox and Express kiosks.