Demi Moore has no need for her Twitter handle — @mrskutcher — now that she’s getting divorced from Ashton Kutcher. What other options does she have? Plenty! 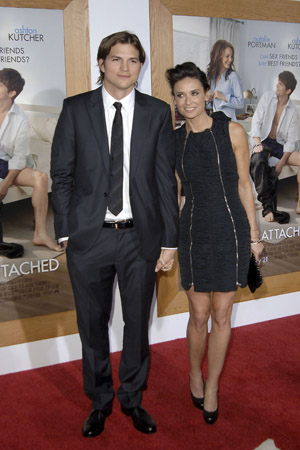 Demi Moore finally confirmed what we all knew was coming: She’s filing for divorce from Ashton Kutcher after six years of marriage.

“It is with great sadness and a heavy heart that I have decided to end my six-year marriage to Ashton,” Moore said in a prepared statement.

“As a woman, a mother and a wife, there are certain values and vows that I hold sacred, and it is in this spirit that I have chosen to move forward with my life. This is a trying time for me and my family, and so I would ask for the same compassion and privacy that you would give to anyone going through a similar situation.”

Many are taking her words as a veiled stab at Kutcher’s alleged infidelity with 22-year-old Sara Leal during their anniversary weekend in October.

However, this brings up the more important question: What will Moore’s Twitter name change to now? She’s known as @mrskutcher on the social networking site, so that obviously won’t work anymore. We’re here to help, though — here are 10 names the scorned actress can take, free of charge. We’ll call it an early Thanksgiving gift.

This one’s pretty obvious — it’s her name. However, we checked it and Twitter tells us that “this user is suspended.” We’re pretty sure the Twitter guys can do some finagling to give it to her, though.

We like this choice, mostly because Kutcher put her through the public humiliation of a cheating scandal not once — but twice.

The longtime couple had three children together before going their separate ways, so this one would make sense. However, Bruce Willis is having a child with his new wife, so she might have competition for that name.

We all had a field day when Moore started dating Kutcher, a man (boy?) 16 years her junior. We wonder if she’s stuck on those younger guys for good. If so, either of these handles would work.

OK, this one might be a little too long for Twitter’s 140-character limit, but it’s pretty much a self-contained personal ad. Actually, we might steal this one for ourselves.

We think these two would look pretty handsome together. Oh, and we’re not worried about Stacy Keibler beating up Moore — she was in G.I. Jane, remember?

Many people have criticized Kutcher for his acting abilities — or lack thereof. Some even believe he wasn’t really acting when he played Kelso on That ’70s Show. Moore knows the inside scoop and can tell us all we need to know about him with that Twitter name.

Both Moore and Kutcher are doing well for themselves financially — she has a successful film and directing career and he has Two and a Half Men, as well as various tech investments. We hope there is some clause in their prenup (if they have one) that states she gets his cash if he cheats. Cha-ching!

“How do you fire Jo Pa? #insult #noclass as a hawkeye fan I find it in poor taste,” he tweeted — and later deleted. He later apologized, but we think he’s the one with #noclass for cheating on his wife.

What do you think Demi Moore should use as her Twitter name now?