When Lauren Bush married David Lauren, it was not the stuffy political event you’d expect, or even an avant-garde fashion spectacle. It was just your average, high-class Wild West wedding.

Related story Did Travis Barker Have a True Romance Wedding With Both Kourtney Kardashian & Shanna Moakler? 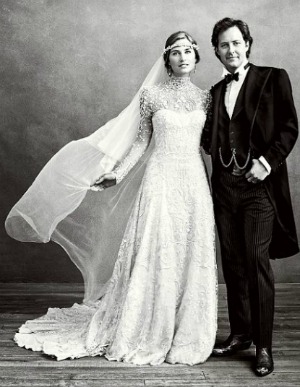 Bush and Lauren celebrated their marriage at the 17,000-acre Colorado ranch of Ralph Lauren — who also designed the bridal gown.

“Any experience of a girl picking out her wedding dress is amazing, but I have to say it was really special to work with David’s dad, to see him in action with his team,” Bush told Vogue.

“I walked in [to Ralph Lauren’s studio] and there were these beautiful illustrations of the looks we’d discussed with my face on them. It was like a dream come true.”

“We sat together and arrived at this silhouette. It isn’t Victorian exactly. I wanted something modern as well, so there is the high-necked collar and puffed shoulders with the large open back,” she explained.

The intricate gown was created by 100 craftsmen devoting 3000 hours to hand-embroidering the flowers and beading.

To complete the look, the bride and her attendants all wore cowboy boots under their gowns.

The wedding was small by celeb standards — just 200 guests including George and Laura Bush — but it was important to the couple to keep a down-home feel.

“You could put out paper plates and confetti and it would be gorgeous, but we didn’t quite do that,” Bush said of the stunning mountain views. The 200-year-old barn where the reception was held was filled with roses, lilies and gardenias.

Guests were fed grass-fed beef as well as a variety of vegetarian dishes. The next day they were treated to a group outing to a rodeo.

The bride is a model who now goes by Lauren Bush-Lauren. The groom is an executive vice president at Polo Ralph Lauren.

See the entire set of wedding photos on Vogue.com.