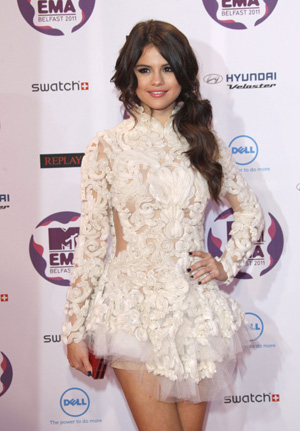 Selena Gomez has kept quiet since 20-year-old Mariah Yeater came forward to claim that Justin Bieber is the father of her three-month-old baby. Now that the paternity suit has been dropped, Gomez opened up on The Ellen DeGeneres Show about how she has been dealing with those claims against her boyfriend.

“What a crazy last two weeks it’s been in the news,” Ellen said, referring to Bieber’s baby mama drama.

“To say the least,” Gomez replied back.

“You’ve been all right,” asked Ellen. “I have been, yeah. It’s not easy,” Gomez said, appearing like she didn’t want to say too much.

“Everything’s all good now. You knew that all along but it’s nice to have everything out in the open now,” Ellen prodded, referring to the recent dismissal of the paternity claim.

Ellen lightened things up when she showed a picture of Bieber in Paris with his pants hanging low and his underwear hanging out. “I think you have influence and I think you can tell him to pull his pants up,” she said.

After telling Ellen her favorite feature on Bieber is his “eyes,” she reveals that she does like to do romantic things for him, although Ellen points out it may be hard to compete with his grand gestures, including renting out Staples Center for a date.

“My favorite is that mine don’t get out,” she says. “That’s my favorite. Obviously, that’s very sweet, but I like to do things that are a little bit different and he always gets mad because everything he does gets out.”