Noel Gallagher is no fan of Katie Holmes — and his most recent run-in with her did little to change that. 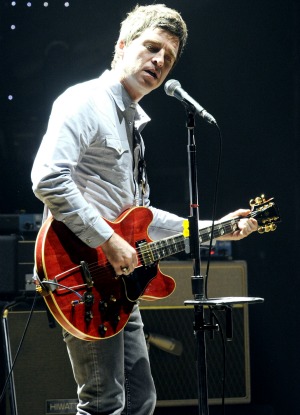 Our favorite grouchy rock star is at it again. Just last week Noel Gallagher gave us his seven curmudgeonly rules for living British rocker style, and now he’s telling us how he can’t stand Katie Holmes and her pesky desire for privacy.

The former Oasis star described his run-in with Mrs. Tom Cruise while they were both guests on Late Night with David Letterman earlier this month.

“We literally bumped into that top Scientologist Katie Holmes on the way into the studio. We came out of the lift and BANG, there she was,” Gallagher wrote on his blog.

“Now at this point my mate, and friend of the stars, Scully, was doing a bit of filming for my website and managed to capture the moment.”

“[Holmes] looked a bit miffed at the various North-West accents and some vigorous handshaking. There was no need to send one of her people over to demand the video be deleted!!!! Unf***in’-believable.”

“We didn’t let it spoil the day though. And what a day. Loved it,” he wrote.

Gallagher’s day was saved by some much more cordial run-ins with Holmes’ Jack and Jill co-star Adam Sandler, Steve Martin and Billy Gibbons from ZZ Top.

“Our dressing room was next door to none other than the legendary comedian Steve Martin who, for some reason, wasn’t on the show but was there anyway — never did get to the bottom of why. He only stuck his head round the door to say hello! What an honour!!! We talked banjo and he had a bit of banter with the lads. Top, top man. Funny as f**k!!” Gallagher wrote.