Ricky Gervais will be back for his third stint as Golden Globes host this January. Will the king of controversy go softer this time? 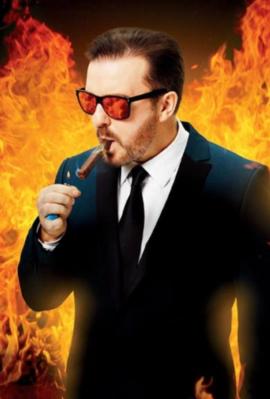 Ricky Gervais has recently been the source of rumblings that he’d been asked back to host the Golden Globes, and now, it’s official: The snarky comedian who offended with his jokes at the Globes last year is set to bring more pain in 2012. Viewers are sure to get a few dirty jokes in honor of the Globes’ 69th annual ceremony, as well as some serious Hollywood slams.

“It’s gonna be biblical,” Gervais tweeted, in response to a Piers Morgan’s tweet that warned Hollywood egos to be “very afraid” now that Gervais is coming back.

The British comedian has made controversy his middle name, and not just at the Globes. His most recent apology came after he used a Down syndrome slur on his Twitter page. But his Twitter feed seems to be promising nothing can slow him down at next year’s Globes.

“Just told Billy Crystal he’d better not use any of my holocaust or pedophile material at The Oscars, He agreed (true),” tweeted Gervais, who was hanging with the Oscar host who stole his chance at a two-for-one hosting gig when news broke.

Then, Gervais retweeted Piers Morgan response to the hosting news: “Dear @rickygervais – please can I have the first ‘Sorry if I offended anyone’ interview after the 2012 Golden Globes, like last time?”

Still not convinced Gervais is planning to blow the lid off the Globes again this year? His next tweet was a link to his opening monologue from last year (see below) with a promise that this year will be like last year times ten.

The 69th annual Golden Globes awards ceremony, held on Jan. 15 at the Beverly Hilton Hotel, will air on NBC. Here’s a look back at Gervais’ opening monologue from the 68th Golden Globes.