In a bizarre turn of events, Mike Sorrentino is suing Abercrombie & Fitch for a cool $4 million. Is The Situation as broke as Snooki says? 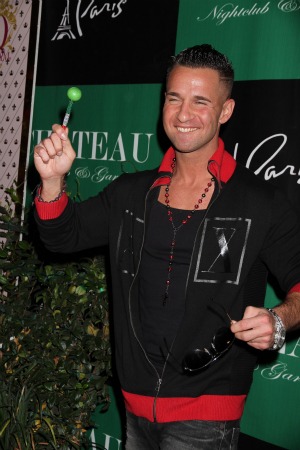 Jersey Shore star Mike Sorrentino — or “The Situation” as he is commonly referred to — is suing Abercrombie & Fitch. Sorrentino claims that when the retail clothing giant said it had offered to pay him not to wear its clothes on the hit show, it was really seeking to profit off him.

He filed his complaint Tuesday in a Miami federal court, asking for $4 million in damages.

Back in August, word was that Abercrombie & Fitch had offered to pay Sorrentino not to wear its clothing line because they thought an association with him would damage their brand.

But Sorrentino’s lawsuit says it never made him any such offer. Instead, he says, the company used his name and catchphrase, “GTL,” (meaning “Gym, tan, laundry,”) to sell its own products (like shirts reading “The Fitchuation”) even as it disavowed an association with him. He’s trademarked both his nickname and “GTL.”

In the lawsuit, Sorrentino and his company MPS Entertainment stated, “Starting in August 2011, Defendant embarked on a grand, worldwide advertising campaign using Sorrentino’s name, image and likeness to create brand awareness for its products by falsely claiming that Defendant had offered money to Sorrentino if he would stop wearing Defendant’s goods.”

“That offer was never made to Sorrentino, nor was it ever conveyed to Sorrentino by a representative,” they continued, claiming that the company “has significantly profited off of the use of its false affiliation with Sorrentino, and it has wrongly used Sorrentino’s name, image and likeness for advertising purposes in violation of applicable law.”

There might be a good reason why Sorrentino is asking for $4 million — according to his Jersey Shore co-star Nicole “Snooki” Polizzi, Sorrentino is broke. Polizzi recently revealed her housemate’s dire financial situation during an interview with men’s magazine GQ.

“Jersey Shore is going to end soon. I’m not going to spend money like Mike. He’s already broke,” she said.