Is Miley Cyrus gaining weight? Maybe, but she doesn’t really care — and Demi Lovato and Liam Hemsworth say you shouldn’t either. 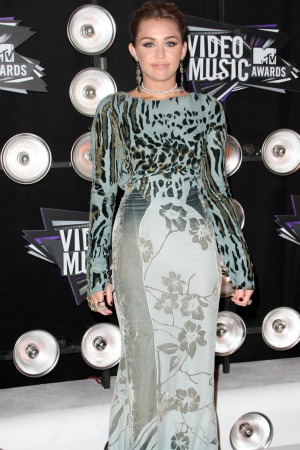 Miley Cyrus has put on a few pounds lately — but she is telling the media that they are the ones who need to lighten up. Her pal Demi Lovato and boyfriend Liam Hemsworth agree.

After photos surfaced of the star performing in a skimpy outfit with decidedly more cushion around her waist, certain celebrity blogs called her out for getting “fat.” Now Cyrus and friends are hitting back, and says that comments like those are what drive young girls to eating disorders.

Cyrus defended herself of Twitter and Lovato later jumped in.

The former Disney star came to her friend’s defense, tweeting, “AMEN! I will destroy anyone that ever calls you the F word. You have the SEXIIIESTTTT curvyyyy body! I LOVE IT!”

Lovato went to rehab for her own eating disorder, among other issues. “I became very depressed, and my only way of really coping with it was through my eating disorder. So I just stopped eating,” Lovato told ABC News.

Miley Cyrus has a hot date with a Marine >>

Cyrus has another supporter in her corner: Boyfriend Liam Hemsworth, star of The Hunger Games.

“There is this place in Nashville called Steak and Shake, which is pretty much the best food, ever. That is our secret, sexy place to go,” he told Who magazine. “When I look over at her when she’s biting into a steak sandwich and there is some steak sauce dripping down her chin, there is nothing sexier than that.”

Maybe A1 Steak Sauce will become the new black.