Kelly Clarkson’s sense of humor nearly stole the show during her recent taping of VH1’s Unplugged. Here are five quotes from the singer that won’t make the cut when the episode airs Nov. 18. 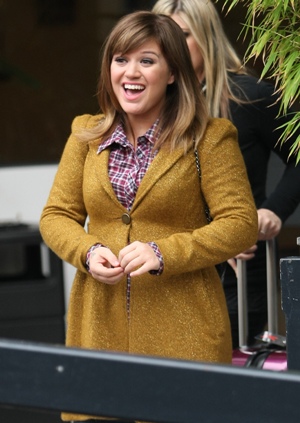 Kelly Clarkson‘s Unplugged stayed true to the shows stripped-down nature, so much so that the singer nearly had a wardrobe malfunction!

In between belting out songs from her new album Stronger, including “Mr. Know it All” and “Dark Side,” the 29-year-old commented on her bust, body and undergarments. Remarks that you won’t see or hear when Kelly Clarkson’s Unplugged airs on VH1 Friday, Nov. 18.

On noticing her boobs nearly falling out of her dress, Clarkson quipped, “Was it Erin Brockovich the whole time?! It’s funny because I have no boobs but they’re coming out.”

She later added, “I realize God didn’t give me boobs, cuz if I had them, I’d show them off. I’d be a slut.”

Billboard reports that after a take during which Kelly Clarkson flubbed lyrics but kept going she commented, “I should have just stopped — just like most of my relationships!”

“This is my diva outfit. You would never see me in this on tour,” she said of her little red dress. “Maybe for one song I would come out like this and be like, ‘Look I’m a girl!'”

Lucky for fans, Kelly Clarkson’s Stronger is the first album she’s made without having to battle management for creative control. “Literally every album, except this album, I’ve had to really push for songs or say no on certain stuff,” she told The Los Angeles Times. “It’s very easy, obviously, for people when their main goal is to make money. But I don’t want to do the same formula as someone else. I want to do my own thing. This album has been a piece of cake. There’s no way to describe it. I’m just waiting for the kick in the butt.”

Be sure to catch Kelly Clarkson on VH1’s Unplugged Friday!