After years of planning, Jason Segel’s muppet masterpiece is finally arriving in theaters. SheKnows hit the green carpet at The Muppets premiere to chat with the cast about their return to the big screen.

From Kermit the Frog and Miss Piggy to Jason Segel and Amy Adams, the green carpet at The Muppets premiere was packed with A-listers. 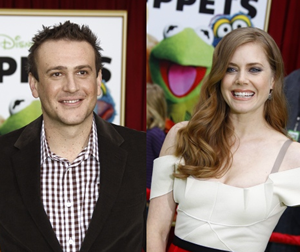 Jason Segel and Amy Adams celebrating The Muppets return to the big screen.

Segel took his admiration a step further, telling SheKnows he actually “idolized” Kermit as a child.

“When you’re a kid, Kermit is the everyman,” Segel told us. “He’s Tom Hanks. It’s who I model myself after.”

Segel, who, in addition to acting, wrote and produced the movie, told us that the premiere was easily the best day of his life.

“It’s been a long time coming,” said Segel. “But it was time for the Muppets to come back to the world, and here we are. It’s truly an out of body experience being here.”

The stars believe that The Muppets are people too

Other stars, like Rashida Jones, who plays a tough network exec in the movie, said being in The Muppets was “a dream come true.”

“I forgot that they weren’t real a lot of times and I would request them off camera,” said Rashida. “I would talk to them and forget that there was a person controlling them.”

But those who grew up watching these furry friends aren’t the only ones who appreciate their charm.

“It was so cool,” said Modern Family’s Rico Rodriguez of his cameo in the film. He also told SheKnows that Miss Piggy is his favorite muppet. “I’m also a little scared,” he said.

Even we got a little star struck when Kermit gave SheKnows a shout out.

“She does Know,” Kermit told Miss Piggy and Walter about our site!