Heather Locklear and Jack Wagner have ended their engagement, confirms a rep for the actress. 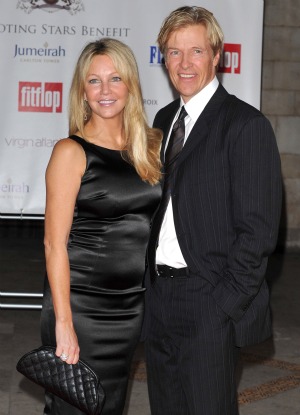 Heather Locklear looked stunning in tight black leather pants and knee-high boots on the red carpet at the premiere of The Twilight Saga: Breaking Dawn Part 1 alongside her daughter Ava Sambora — but there was one accessory that was noticeably missing from her outfit. Despite becoming engaged to actor Jack Wagner three months ago, Locklear was sans engagement ring — and it turns out there’s a sad explanation.

“Jack and Heather are no longer engaged,” confirmed Locklear’s rep.

There’s no word yet on what caused the split.

The pair met way back in the ’90s on the set of Melrose Place, where they played eventual lovers Amanda Woodward and Dr. Peter Burns. Both were married at the time.

At the time of their engagement, Locklear told People magazine that her daughter Ava was over the moon the two were finally making it official.

“Ava was so excited when we told her,” she told the mag. “She hugged Jack, said congratulations, and she immediately wanted to see the ring.”

“I want her to do what makes her happy,” Ava said of her mom. “That’s the main point.”

Despite the breakup, both Heather and Ava looked perfectly content on the red carpet at the Breaking Dawn premiere last night.

Wagner would have been Locklear’s third husband. In addition to Richie Sambora, she was also married to Motley Crue rocker Tommy Lee from 1986 to 1993.