As Regis Philbin’s long and distinguished career on Live! with Regis and Kelly comes to an end, his favorite guests and friends make appearances on his show to pay respect to the man who has logged around 16,000 hours on air. 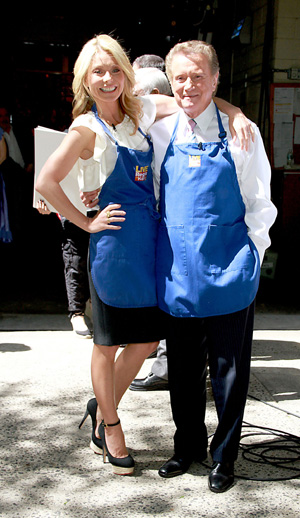 Regis Philbin has been a fixture of daytime television since 1985, when he won ratings and the people over with co-host Kathie Lee Gifford. His success continued when Kelly Ripa replaced Kathie Lee in 2001, when the show became known as Live! with Regis and Kelly. Now 80 years old, the man that holds the Guinness World Record for most time spent in front of the television camera has decided to enjoy life off camera.

With the countdown on until his final show on Friday, Regis has a big week lined up of favorite guests and longtime friends. With the theme of the week “musical tributes and more,” Regis kicked off his last week on Live! with Jimmy Fallon and Don Rickles on Monday, while Tuesday he welcomed Donald Trump. On Wednesday, talk show host and longtime friend David Letterman will make an appearance and Thursday will prove to be a must-see with an appearance by Kathie Lee. The last show on Friday will consist of an hour-long tribute to Philbin. Throughout the week, there will be musical performances by Tony Bennett, Josh Groban and Bret Michaels.

There is no doubt that Ripa will miss Regis and she calls him “irreplaceable,” which could be why ABC has yet to name a replacement. “I think he is the world’s greatest storyteller,” Ripa said of Regis. “That’s his gift.” Jerry Seinfeld has been slated to host with Ripa on Nov. 21-23, however the network wants to take its time finding a permanent replacement moving forward.

What’s next for Regis? He has said that this is the end of his morning show career, but not his career. We look forward to seeing the next chapter in Philbin’s life!

Tell us: Who do you think should replace Regis Philbin?