Kellan Lutz tried to do something nice for the Breaking Dawn fans camped out for the film’s premiere. Why was he shut down by Nokia Theater officials? 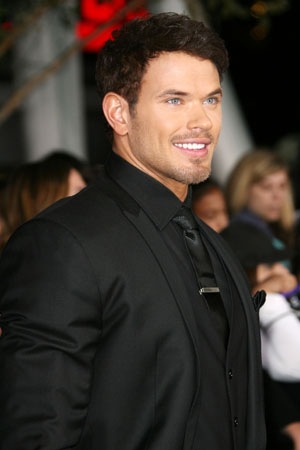 Robert Pattinson and Kristen Stewart might have been the talk of The Twilight Saga: Breaking Dawn — Part 1 premiere, but it was Kellan Lutz’s sweet gesture that had many fans swooning.

According to The Hollywood Reporter, Lutz stopped “by late [Sunday] evening with 40 dozen glazed Krispy Kreme doughnuts for his devoted fans. He started making his way through the three massive tents, nestled between the Nokia Theater and the Staples Center, passing out the baked goods with staffers from Summit Entertainment, when he was cut short.”

Why would the venue stop him? It’s apparently a violation of Los Angeles city code to pass out food.

That didn’t stop the Breaking Dawn star, though: He ended up signing autographs for fans for about an hour and a half, according to the magazine.

Fans created a “tent city” for several days before the Monday night premiere. “My wife, daughter and I all flew in together. We are a Twi-Family,” Eddie Maurice of Fort Meyers, Florida, told Access Hollywood.

“Twilight provides us common ground, keeps our family talking… We watch all the movies together. It’s just great for our family unit.”

Another fan rented a hotel room for the duration of the wait, but opted to stay outside.

“A lot of people think we don’t shower, but I have a room right here at the Marriott. I sleep out here but I go to the room in the morning and shower and try to get cute,” Laura Barraza said.

Oh, those Twi-hards will do anything for Bella, Edward, Jacob and the gang.

Are you ready for the release of The Twilight Saga: Breaking Dawn?