Robert Pattinson is excited for fans to see the latest Twilight film. He took a break from taking girls’ breaths away at the premiere of The Twilight Saga: Breaking Dawn — Part 1 to chat with SheKnows about the film. 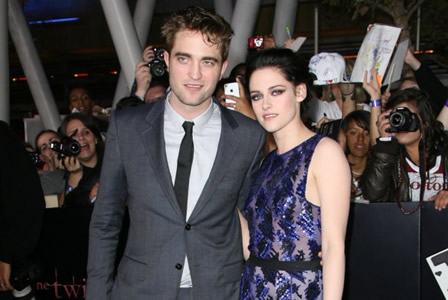 Robert Pattinson showed just how appreciative he was of the thousands of screaming fans who camped out for days at the Nokia Live Theater in Los Angeles to get a glimpse of their favorite vampire at the premiere of The Twilight Saga: Breaking Dawn — Part 1.

Even though it meant being late to his own premiere, the charming actor spent over an hour signing autographs and taking photos with teary young fans and their self-proclaimed “cougar Twi-hard” mothers.

Hundreds of fans carried signs proclaiming their undying love for the immortal character Edward Cullen stating things like, “If I was old enough, would you marry me?” and “Edward, you’ve robbed my heart.”

After years of this kind of behavior though, Pattinson told SheKnows he’s still impressed by their loyalty.

“It feels pretty amazing,” said Pattinson. “I really didn’t expect it to be this big after the first one.”

When questioned whether this has turned him off to having babies of his own, the comical actor quipped, “If I ever end up giving birth it would be pretty terrible.”