Charlize Theron tells Vogue that her Snow White and the Huntsman co-star Kristen Stewart “is a child.” Did she just diss the Breaking Dawn actress?

Are Charlize Theron and Kristen Stewart feuding on the set of Snow White and the Huntsman? If you take the Oscar winner’s interview with Vogue at face value you would certainly think so — but it’s all in jest. We think. 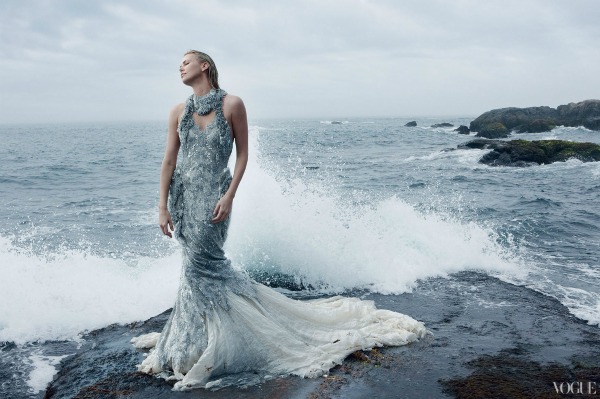 Theron commented on the insanity surrounding Stewart, The Twilight Saga and fame in general, “She just turned 21. She’s a child.”

“When I think about myself at 21, I had just done The Devil’s Advocate, and Keanu [Reeves] had paparazzi following him and Al Pacino said this thing to me: ‘If I knew that my life would be under this kind of scrutiny, I would have never become an actor.'” And I thought, Wow. I couldn’t comprehend it.”

See the deliciously dark trailer for Snow White and the Huntsman >>

“And Kristen is just living this to the max and still has a sense of humor about it,” Theron continued. “There’s this really lovely quality about her that just doesn’t give a f**k. A lot of people say they don’t, but then they go home and cry and pop a Xanax. Kristen actually doesn’t give a f**k. That’s what’s so refreshing about her.”

Charlize Theron has baby on the brain >>

In Snow White and the Huntsman, Theron plays the Evil Queen to Stewart’s not-so-delicate princess.

“I’m looking forward to killing her and taking her beauty,” Theron says. “That’s what happens, right?”

The flick is currently in production, but you can catch Theron in the upcoming film Young Adult with Patrick Wilson, due in theaters Dec. 16.

Read the entire Charlize Theron interview in this month’s issue of Vogue.