Kim Kardashian has returned to the public eye in a small way. The reality star posted a letter to fans on her blog, breaking her silence for the first time since announcing her intent to divorce Kris Humphries. 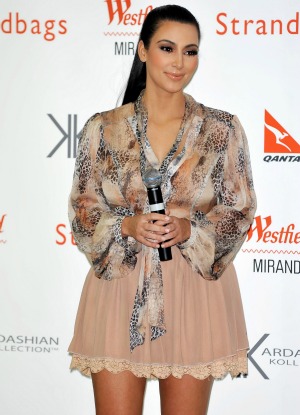 She’s baaaaaaaack! Kim Kardashian has stayed out of the public eye since bailing out of her Australian trip in the middle of a promotional tour — but now the reality star is breaking her silence for the first time since announcing her split from Kris Humphries after just 72 days of marriage.

Kardashian posted a note on her blog thanking fans for their support during this tumultuous time.

“Hi everyone! I just wanted to thank you guys for all your support these last two weeks,” she wrote.

“I took a break from blogging for a while, but I’ve missed you guys so much and I want to start sharing my updates with you all again. I’ve been reading all your comments on here and, as always, my loyal blog dolls have been nothing but supportive. You all know who you are, so thank you! I love you guys.”

The blog post comes hot on the heels of word that Kardashian intends to sue a former PR partner who claims her wedding was scripted, along with much of the rest of her televised life.

“Everything that he is saying is false and nonsense,” attorney Marty Singer told TMZ. “This guy is in it to promote himself for his 15 minutes of fame.”

Khloe Kardashian is cracking up over SNL spoof >>

Kardashian claims the PR flack, Jonathan Jaxson, only worked with her once years ago and that a confidentiality agreement legally prevents him from discussing the star at all. However, Jackson says the only such agreement in his possession has no signatures on it and is therefore null and void.