The first Hunger Games trailer is here and it promises a little glam and a battle royale. 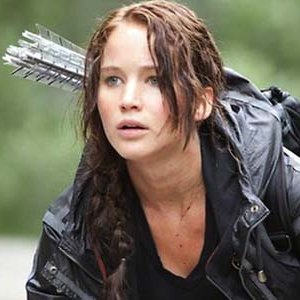 The sun doesn’t shine much in The Hunger Games. The first trailer for the upcoming sci-fi thriller finds Katniss Everdeen (Jennifer Lawrence) and Gale Hawthorne (Liam Hemsworth) frolicking in a field on a dewy day.

“We could do it, you know, take off, live in the woods,” Gale says.

As if to prove the point, Katniss lets an arrow fly and an ominous airship appears out of nowhere and blocks what little sun there is. The eyes of the Capital are everywhere.

The Hunger Games trailer was debuted this morning on Good Morning America from Lionsgate.

In the trailer, it’s a dark world, indeed. Katniss’ District 12 spans a hilly landscape, wet and limp with burden and direness. The Hunger Games of the title refers to a sporting event in which young participants, ages 12 to 17, are chosen from the districts and ordered to fight to the death for the enjoyment of the denizens living in the opulent Capital.

Once selected, Katniss gets whisked way to the Capital, a steely and churning metropolis that Fritz Lang would be proud of. There, she gets her hair done, legs waxed and is fitted for a striking off-the-shoulder red gown before being shown on TV.

Oh, Katniss is also trained in the art of mortal combat.

“I just keep wishing that I could think of a way to show them that they don’t own me,” says fellow tribute Peeta Mellark (Josh Hutcherson). “If I’m going to die, I want to still be me.”

“I just can’t afford to think like that,” Katniss says.

The countdown to the games ominously begins and Katniss dashes to battle.

Along the way we see snippets of Lenny Kravitz as Cinna, Stanley Tucci as Caesar Flickerman, Woody Harrelson as Haymitch and Elizabeth Banks all done up as Effie Trinket. The movie, due March 23 in theaters, is based on the hit young adult novel by Suzanne Collins.