Anna Kournikova is leaving NBC’s The Biggest Loser. Her stint as a professional trainer on the show has come to an end, according to an official statement released today. 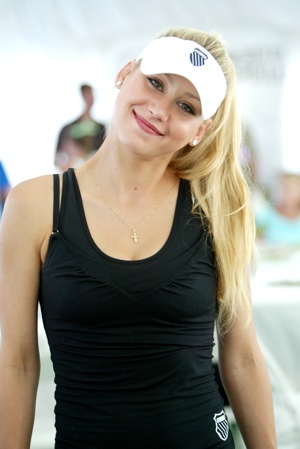 The Biggest Loser has lost another celebrity trainer. Tennis pro-turned-fitness trainer Anna Kournikova has announced her departure from the show after just one season. She released an official statement confirming her exit earlier today.

“I enjoyed my time on the Biggest Loser ranch. Although I will not be returning as a full-time trainer on season 13, I will always be a part of The Biggest Loser family and my commitment to bettering lives through health and fitness will continue.”

Kournikova was brought on after the departure of original trainer Jillian Michaels following season 11. She worked alongside mainstays Bob Harper and Dolvett Quince on a weekly basis to whip overweight contestants into shape. Prior to her Biggest Loser debut, producer Todd Lubin told Entertainment Weekly, “You’re going to be blown away by how sincere she is, how intense she is, how focused she is for these folks. She’s totally dedicated to the point where she’s getting Bob back into the gym. At one point she breaks down in tears, just because she’s so moved by the stories. None of it is fake.”

Kournikova seems to be a genuine health-nut. During her short stint, she stood out from the other trainers by focusing on discipline and realistic goals. She didn’t always mesh well with the contestants but she pushed them to their limits and got results.

Over the past few seasons, The Biggest Loser has experienced a dip in ratings and it’s unclear as to how Kournikova’s exit will effect those numbers. There’s also no word on whether the show will keep its current roster or add new trainers like they’ve done in the past. Stay tuned!