From secret codes, to freezing rain, to getting recognized in the grocery store, Elizabeth Reaser, who plays Esme Cullen in the Twilight series, dishes on being part of the global sensation that changed her life forever. 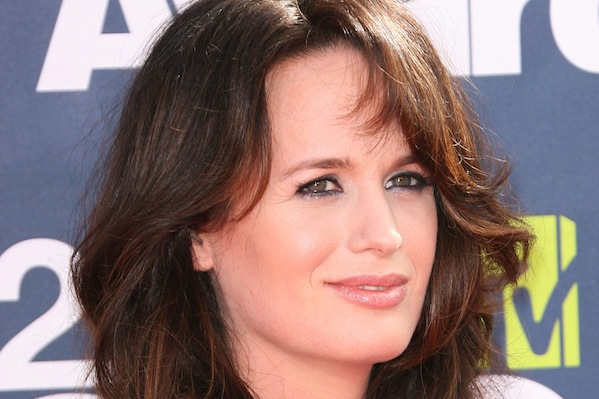 When two young fans approached actress Elizabeth Reaser about being Esme Cullen before the first Twilight movie ever hit the big screen, the 36-year-old actress knew it was going to be huge.

“The movie hadn’t even come out yet,” she tells SheKnows in an exclusive interview about what it’s like to have be part of the amazing journey that is the Twilight film series. Reaser plays the adoptive mother of Edward Cullen, played by Robert Pattinson, in the vampire-romance series that has taken the world by storm.

The fourth installment in the series, The Twilight Saga: Breaking Dawn Part I, releases Nov. 18 to scores of anxious fans.

SheKnows sat down with Reaser to talk about the filming of this epic saga, working with Pattinson and co-stars Kristen Stewart and Taylor Lautner and the impact the film has had on her life.

SheKnows: What’s a typical day on a Twilight set like?

Elizabeth Reaser: Sometimes it’s very chaotic, especially in these last two. There were so many vampires. What happens is there are a million cars that come and pick us up in the morning and we basically took over a hotel in Canada. When we were in Louisiana, we took over two hotels and in the morning there are all these secret codes to get in the buildings. There’s all this secrecy and issues of security because of the fans or potential crazies.

SheKnows: How do you avoid “potential crazies?”

Elizabeth Reaser: There are a lot of security issues to deal with. Security to get on set and to get off set.

High security, all the time

SheKnows: What happens once you’re actually on set?

Elizabeth Reaser: There’s a lot of people, you know, it’s like a big movie. They bring you breakfast, they bring you coffee. If you want a water, someone brings you a water. It sounds very fancy, and on one level it is, but it’s also the least glamorous job in the weirdest ways. You’re just grinding it out for 16 hours a day. And, it’s often freezing cold. Especially on Twilight movies, it’s always cold and raining and there are a lot of physical challenges, so it feels much less glamorous in the doing than it does in the telling.

SheKnows: Is there a scene in Breaking Dawn that was most challenging?

Elizabeth Reaser: There was one where I was hanging over a river off a cliff and in a harness and I found that very challenging because it was in an action sequence and I wasn’t told before we were shooting it.

SheKnow: How could they not warn you about filming an action sequence?

Elizabeth Reaser: I knew I had to do some action stuff, but I didn’t know if I was going to be running or crouching behind a tree or something, and then I got there and they were putting me in a harness over a river. Probably the best thing they did was not telling me what I was going to be doing because I would have flipped out. It was really, really scary. And also really fun at the end of the day.

The most amazing, unglamerous job in the world 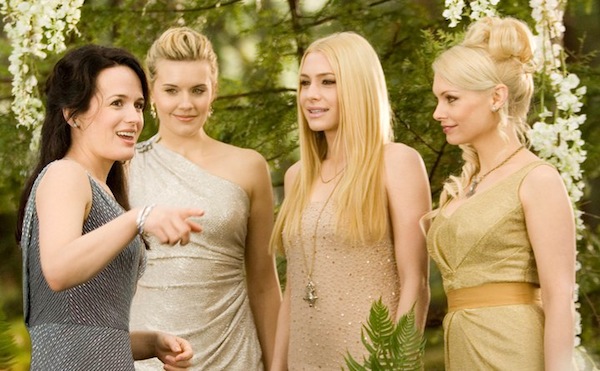 SheKnows: What’s the mood like on set, any pranks, jokes or is it all very serious?

Elizabeth Reaser: There’s not a lot of that because we’re under the gun the whole time making these movies. As much money as these movies have, it takes a lot of money to make them, so we don’t have a whole lot of time to really jack around. And it’s dangerous. Also, when you’re cold and you have contact lenses on and a tiny little tank top, you’re not feeling like joking around.

Working with Kristen, Rob and Taylor

SheKnows: What’s it like to work with Kristen, Rob and Taylor?

Elizabeth Reaser: We all were inexperienced in this kind of movie and what it was going to bring to our lives. So, we’re all sort of in the same boat. They are like any other actors that I’ve worked with. Everybody shows up and does their job and hopefully has fun.

SheKnows: Can you give us any secrets on Breaking Dawn Part 2?

Elizabeth Reaser: The stuff that I really love is all the international vampires that show up. It’s just so exciting to suddenly see Egyptian vampires and Romanian vampires and the Denali clan and all these really cool crazy new gorgeous creatures that are part of our family now. That was really fun and really hard to shoot too, because when you have 20 people in a scene it takes a while.

SheKnows: How is Twilight different from some of the independent films you’ve worked on?

Elizabeth Reaser: It couldn’t be more different. The experience of being on a movie like this… it’s not an intimate experience. I’ve done tiny little independent movies that have been made for less than $1 million where you’re all staying in a house together or you all go to the store together to buy your groceries. Twilight has its challenges, but also they have the money on these kinds of movies to do things right and that is nice too, because it makes it easier to do your job.

SheKnows: How has your life changed since the first Twilight?

Elizabeth Reaser: It’s funny, I’m really unaware of it for most of the time and then I’ll be in a restaurant or grocery store and it’s always surprising to me that the most random people will come up to me or sometimes yell something at me. It’s such a wild experience to be part of something that reaches so far and so many countries.

Elizabeth Reaser: Whenever the movie first came out, people would ask me questions about Rob. But I think, for the most part, people are just excited and they are just fans. And they just want to say hey, “I love the movie.”