Kim Zolciak has married Atlanta Falcons player Kroy Biermann in a gorgeous ceremony in Atlanta on 11/11/11. 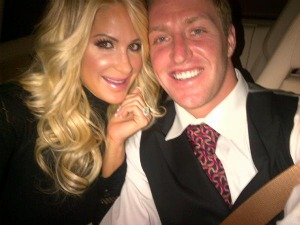 It really was her lucky day. The sun shone as Kim Zolciak wed Atlanta Falcons player Kroy Biermann on 11/11/11 — an anniversary date Biermann won’t be able to forget.

“Beautiful weather! Beautiful day!! I’m walking on a cloud and I’m so grateful,” the Real Housewives of Atlanta star posted on her Twitter account shortly before her marriage.

“I want to Thank all of u tweethearts for all the congrats & blessing for our special day tomorrow I read everyone & it means so much! Love u,” she posted last night, along with, “Gooood night!!! I’m sooo exhausted yet so excited!!! #mrsbiermann.”

The couple, who have a 5-month-old son, Kroy Jagger Jr., said their vows around 4:30 p.m. at their Atlanta home.

But Zolciak wasn’t the only one tweeting her excitement. Biermann, her hubby-to-be, also wrote, “Thank you everyone for your early congrats and best wishes!!! @Kimzolciak has made me the happiest man alive!!! 11.11.11.”

The nuptials were filmed — of course — for a new spin-off show. Guests had to agree to be filmed or they could not attend the wedding, according to reports.

The duo, who met at an Atlanta fundraiser in 2010, announced their engagement in October.

It’s the second marriage for the reality star turned “Tardy for the Party” singer, who already has two daughters (Brielle, 14, and Ariana, 9) from previous relationships. This is the first wedding for the 25-year-old Atlanta Falcons defensive end.

Let’s hope that this celebrity wedding will last longer than 72 days. But considering Zolciak and Biermann actually got the know each other before getting married, there’s a good chance this one will last — for a few years, at least.