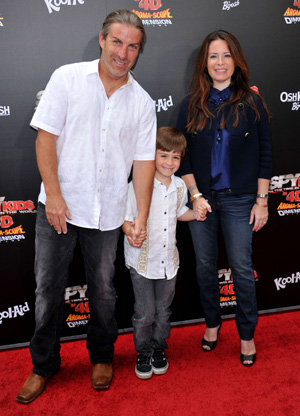 Combs, 37, met Donoho in 2001 when he was a key grip on the set of her show Charmed, in which she played the witch Piper Halliwell. The couple got married on Valentine’s Day in 2004 and have three kids together, 7-year-old Finley, 5-year-old Riley and 2-year-old Kelley.

No word what caused the split, but TMZ is reporting that a source says the relationship has been on the rocks for “quite a while.” Combs is requesting joint custody for their three children.

The couple reportedly has no prenuptial agreement, which could mean an expensive divorce for Combs.

Because today is Veterans Day, the court documents are not readily available — something we are sure Combs was aware of in choosing to file today.

This is Combs’ second divorce — she married and divorced actor Bryan Travis Smith in the ’90s.

Based on her recent Twitter feed, Combs seems to be coping well, thanks to her friend and former Charmed co-star, Shannen Doherty. “Fast car. Loud music, Partner in crime/right arm @DohertyShannen and suddenly we are 19 again. #TruLuv,” she tweeted this week.

It seems that Combs’ Charmed co-stars are having better luck with love, lately. Doherty just married Kurt Iswarienko in Malibu on Oct. 15 (although it is her third marriage). Alyssa Milano married agent David Bugliari two years ago and they just had their first child, a boy named Milo, in August.