Kim Kardashian staged an engagement to ex-boyfriend Reggie Bush, her ex-publicist claimed. Is anyone really surprised? 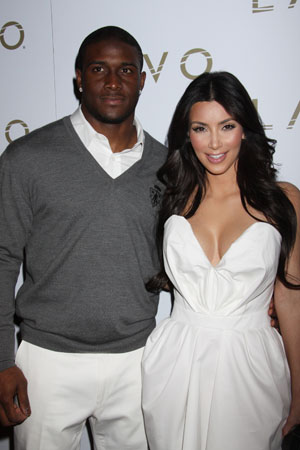 SheKnows is going to go out on a limb here to say that Jonathan Jaxson really doesn’t want to work in celebrity publicity anymore. The ex-flack of Kim Kardashian is currently shopping a book about his high-powered career and he’s letting the public in on his former clients’ secrets.

His biggest reveal? He totally concocted a story about Reggie Bush proposing to then-girlfriend Kim Kardashian.

“I staged several of the moments that the world has seen of her, such as a ring that we alleged was from Reggie Bush,” he told KTLA during an interview. He called photographers to a Beverly Hills jewelry store in 2007 and Kardashian walked out wearing a ring Jaxson claims is identical to the one Kardashian reportedly received from soon-to-be-ex Kris Humphries.

“Let me go to a ring store and act as if I’m walking out and Reggie Bush is proposing to me,” Jaxson recalled the reality star as saying.

He’s even going as far as to claim her wedding to Humphries was a fake.

“Unfortunately they were obligated to honor contracts, otherwise they would have owed a lot of people a lot of money,” Jaxson said. “They had a lot of contracts, they had endorsements. To say they weren’t paid is a lot of foolish garbage.”

We’re more apt to believe him over Kardashian’s repeated claims that she hasn’t earned a dime on her wedding.

Another juicy detail he confirmed: She hooked up with Kanye West. Still, she only has eyes for her ex, Reggie — at least according to Jaxson. Too bad he doesn’t want anything to do with her quest for fame.

Do you think Kim Kardashian fakes her relationships?