Katie Holmes… a domestic goddess? Not quite — but she does make a mean cupcake! Check out this video clip of her upcoming Thanksgiving interview with Martha Stewart. 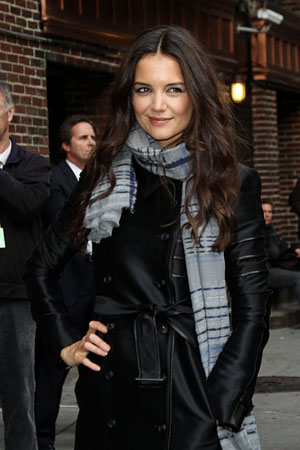 It’s probably not surprising that Katie Holmes isn’t a domestic diva — she’s too busy with her work and managing the closet of her fashion plate daughter, Suri Cruise.

Holmes appeared on Martha Stewart’s show to talk about all things Thanksgiving and it’s safe to say she won’t be cooking a huge dinner this year.

“I did this movie called, Pieces of April and I worked with a turkey,” Holmes told Stewart in the interview airing Nov. 15. “And I had to pull everything out.” It wasn’t exactly a fun time for the actress. “I had to call my mom and say thank you for all the Thanksgivings and I’m never going to make one,” she joked.

There is one thing she’s good at, though: baking.

“My mom started a tradition where she makes these amazing pumpkin bars almost like a pumpkin cake with cream cheese frosting but it’s not too spicy,” she said. “In my family we travel so much and we’re constantly living in hotels so my daughter and I have been in the living room of the hotel with powdered sugar going everywhere making these to keep up the tradition. They’re really gooey and moist.”

Of course, Stewart wanted to know if her hubby, Tom Cruise, likes them.

“Yes, I haven’t met anyone who doesn’t like the recipe,” she said.

As for the family’s Thanksgiving plans? They’ll be in Los Angeles. “I’m not a big cook so I usually go to the flower mart in downtown Los Angeles and I make up for my lack of cooking with a good presentation,” she joked.

They’ll have a turkey, though. “I make sure the fixings are there I just don’t tell how they got there,” the Jack and Jill star said.